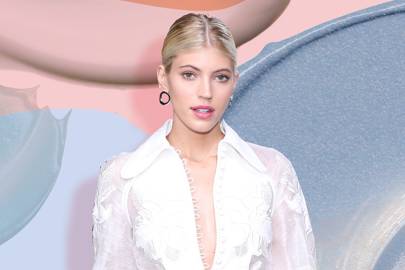 Being able to recognise when to be quiet is one of life’s greatest gifts, and Victoria’s Secret model, Devon Windsor, found out the hard way when she openly compared her hair struggles to her model sisters not getting booked for shows because of their skin colour.

What’s more, she made the error of doing it on TV.

During an episode of New York Fashion Week docuseries, Model Squad on E!, the supermodel chimed in on a conversation about diversity with fellow models, Shanina Shaik and Ping Hue.

In the conversation, Shanina (who is of Arab, Pakistani and Lithuanian descent), explains to her friends: “I used to get bullied. Because of my skin colour, I wasn’t gonna be able to do high fashion.

“A lot of black girls would have to miss Milan because they weren’t able to walk in the shows because they don’t want girls of that colour.”

This is the part where you’re supposed to acknowledge that she has a point and be supportive.

But not for Devon…

Instead, she decided to hit back saying: “I literally f*cking went through hell and literally lived in different countries like every other month, and didn’t speak that language,” she told the other models.

She continues: “You know how hard it is to be blonde? I have to get a highlight every month! Do you know how expensive that is?”

Yes Devon, we do, BUT NOW IS NOT THE TIME SIS.

Naturally, Ping Hue looked back at her like “girl, really?” and Devon has since taken to Twitter to apologise for her behaviour, amid a lot of backlash on social media.

In the post, she wrote, “I want to apologise for what I said. It goes without saying, that the comments in the show are incredibly insensitive. The majority of the conversation was edited and if a peer of mine wanted to discuss such a serious subject, I would never follow it with a joke.”

“I have an immense amount of respect for my peers. I know the struggle of diversity and inclusion in my business as well as in so many others is not one to take lightly. I made a comment in jest to infuse levity and I feel terrible that I have hurt others. I’m even more disappointed that my comments could lead anyone to believe that I have a prejudicial bias.

“I respect, honour and admire all of those breaking barriers and working to forge a new and inclusive community both in and outside of the modelling industry. I hope that I can continue to learn from others, I am always trying to be a better version of myself.”

Theresa May Proposes Plans To Train Teachers In Mental Health

Is The Dewy Trend Dead? Why Matte Skin Is Making A...