From the moment Jessica Simpson became a mummy, life would never be the same.

And not only because right after she gave birth to her first child Forbes also estimated her net worth to be roughly $100 million.

“Motherhood is the best thing I’ve ever experienced—and the most challenging,” Simpson told People in January 2013. At the time, daughter Maxwell Drew Johnson was less than a year old and the singer and reality-TV star turned fashion mogul was already expecting her second child with then-fiancé Eric Johnson. (“We’ve had two different wedding dates, but he keeps knocking me up,” Simpson quipped on the Tonight Show.)

“It is the sexiest thing in the world to watch how he handles [Maxwell],” Simpson said about her partner in parenthood. “We’re both learning together, but it’s fun because we both get to grow in our relationship together.”

Talking about her jam-packed schedule, which at the time also included being a judge on Fashion Star, she continued, “I get really sad if I don’t get to see [my daughter]. And then when Maxwell sees me, she just stares at me and touches my face. I can tell she missed me. That breaks my heart.”

But in the meantime, Johnson—who retired from the NFL in 2008 and met Simpson in the spring of 2010, never to be far from her side again—proved to be quite the attentive father.

“Eric is a hands-on dad and while I was pregnant, he did a lot of the heavy lifting so he has a very special relationship with Maxwell. She just adores him!” Simpson gushed to Parents magazine about three months after giving birth to son Ace Knute Johnson on June 30, 2013.

Maxwell “loves being a big sister,” she continued. “I come from a really close-knit family and we’re always together. Maxwell gets to spend a lot of time with all of us and her older cousin, Bronx. She loves being around him and Ace and sharing the attention. She’s stepping into her own as a toddler, and it’s exciting to see her take on the role of big sister; she loves imitating Mom and Dad.”

Admittedly, for over a year “I felt like I was in eternal new-mom mode! Because I had just had Max, so much was familiar to me and that really helped me through my second pregnancy. Eric and I are calm and supportive. We take parenthood one day at a time, but sometimes we have to reassure each other and say ‘we’ve got this.’ I can’t lie, I’m happy to be done with pregnancy right now!”

Maxwell and Ace’s parents finally found time to plan and participate in a wedding on July 5, 2014.

Fast-forward to today, when Simpson revealed that her third child—and second daughter—is on the way, and life couldn’t be much sweeter for the family of soon-to-be five. This time around, 6-year-old Maxwell and 5-year-old Ace were old enough to help with the announcement, which came in two parts on Instagram.

“This little baby girl will make us a family of five,” Simpson captioned a photo of the kids releasing a bunch of pink balloons in the backyard. “We couldn’t be happier to announce this precious blessing of life.”

She followed that up a couple hours later with an effortlessly fresh and stylish bump pic.

But overall, Simpson’s Instagram page is one of those accounts that you can’t help but admire because everyone looks as if playing outside and living the good life is their job. (Not to mention the impromptu at-home Gucci fashion shows, private jets, truly sweet family photos and the occasional meeting with royalty.)

But showing off her good life sort of is Simpson’s job, at least part-time, her enviable Instagram account complementing her billion-dollar business.

Usually the kids are front and center in the travel album, and like any mom Simpson loves taking casual snaps of them at home, on their way to sporting events, on the first day of school etc,  but she and Johnson got to vacation this past spring in paradisaical surroundings on their own, their first adults-only, non-business trip since their honeymoon.

“I’ve learned that sometimes love is not enough,” Simpson told Redbook back in 2014. “You can have a soul mate and be madly in love with that person, but it’s not necessarily enough. I think you have to have personalities that mesh well. You have to be the yin to their yang. You also have to be open to figuring things out together and communicating— even when it’s the last thing you want to do. I have to admit, it doesn’t hurt that Eric is one of the hottest men I’ve ever seen—and he looks amazing naked!” 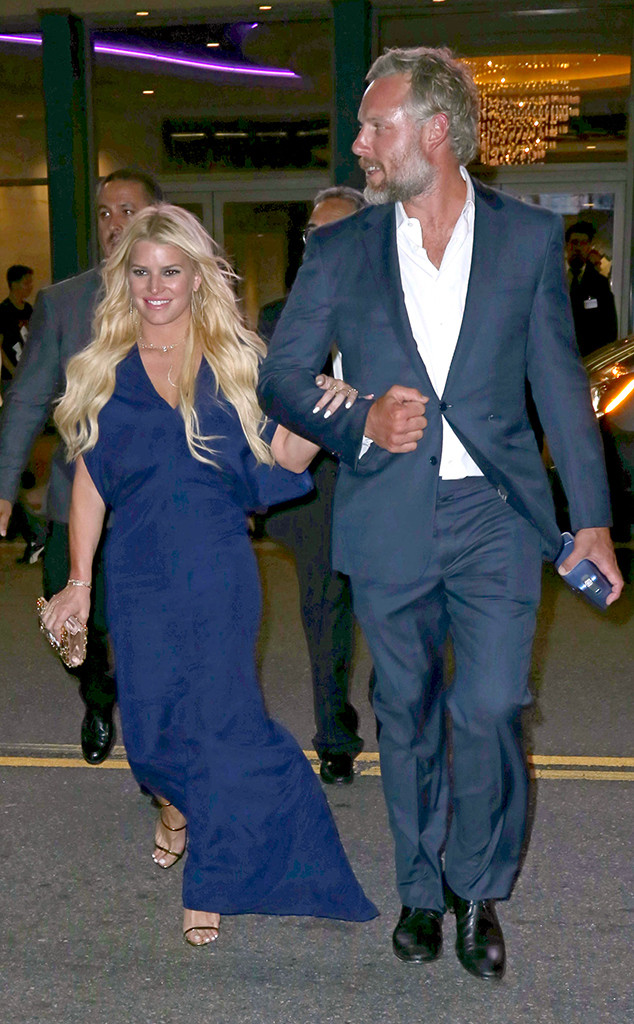 Truly, the couple, who are always finding new ways to keep the romance alive, legitimately look like people who don’t like to keep their hands off each other for long.

That being said, Simpson said firmly back in 2015 that she didn’t envision getting pregnant again any time soon, if ever. Little sister Ashlee Simpson had a 2-month-old at the time, daughter Jagger, and the baby fever was not catching.

“No more kids on the horizon,” she told Entertainment Tonight. “That would freak me out a little bit.”

Of course, that was three years ago, more than enough time for her mind to change on that one. And we’re guessing that, once again, she’s approaching pregnancy with an eye on what to expect after she’s finished expecting.

A former face of Weight Watchers, she has been frank over the years about what goes into maintaining the figure she prefers. After Ace was born she stuck to simple meals like grilled chicken with salad and spent a lot of her increasingly rare “me time” working out.

“A lot of squats! A lot of push-ups, got to keep these things up,” she shared with ET. “And running around with my kids. That is a diet in itself.”

Based on her own experience, she told Parents, “Plan ahead. When you’re running around after two, or even just one, it’s too easy to just grab whatever snack you have in the house. But if you have a meal or a healthy snack planned, you won’t necessarily go for the chips or the macaroni and cheese you made for your child for lunch.”

While Simpson loves to have a good time and joke around, once she commits to a plan, she doesn’t stray from it.

“I’m very in control of who I am,” she told Redbook. “I’ve always been that girl who is driven and determined. I’m sure that has something to do with all the responsibility I had when I was very young. I was essentially supporting my family from when I was 14.”

Born in Texas but based in Los Angeles for years now, Simpson also can count on Ashlee and mom Tina, all of whom live nearby, for support. “These ladies have taught me the true meaning of strength and power,” she captioned a photo of her with her mother and sister on International Women’s Day in March.

Simpson and Johnson listed their five-bedroom Beverly Hills home in 2013 (the person who bought it later sold it to Jennifer Lawrence) and went the way of the growing family—into the Valley. For a reported $11.5 million they took an 11,000-square-foot, Cape Cod-style estate in the gated community of Hidden Hills off of Sharon and Ozzy Osbourne‘s hands.

Simpson couldn’t have been surprised to find out that Maxwell had inherited not just her photogenic qualities (as did Ace), but her stage presence as well. At 4 she made her runway debut modeling kid sizes for Mom’s latest signature collection, and Simpson joked to ET this year that Maxwell would have been happy to take over—if she’d been hired this time.

“She just does it every day to be honest, like there is no stopping her,” Simpson said, referring to Maxwell’s love of fashion and her tendency to model whatever she’s wearing anyway. “I don’t know what else to do, it is out of my control.”

Last year she and Johnson threw Maxwell a mermaid-themed party and this year America’s next top model was treated to a circus party. A week later the family saw Frozen on Broadway. Then Simpson and sister Ashlee took their girls to Disneyland together. For his 5th birthday on June 30, Mom and Dad took Ace, a dapper pre-K graduate if there ever was one, to a baseball game.

So they’re having some fun.

And if once her kids are older they want to walk a runway, or sing, or act, or create their own spotlight in any way, Simpson is all for it.

“I would definitely embrace my children to being performers,” she said. “To me they’re like the stars of my life, so I would love for the world to see what I see.”

So far, the sneak peek Jessica Simpson has offered of her family life has been a promising opening act.

6 Things We Learned About Meghan Markle From CBS’ Meghan and...