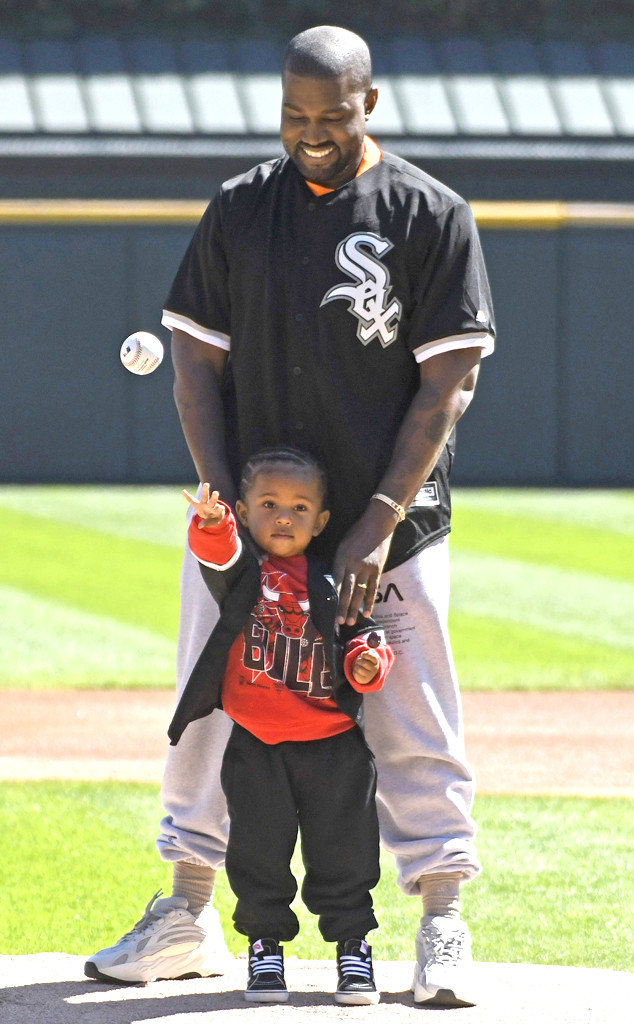 It’s good to be the son of Kanye West.

The 41-year-old rapper and his and wife Kim Kardashian‘s 2 and 1/2-year-old boy Saint West, their middle child, both threw a ceremonial first pitch before the Chicago Cubs-Chicago White Sox “crosstown” game at the latter MLB team’s Guaranteed Rate Field.

As his 2007 “Homecoming” played from the speakers, Kanye, who grew up in Chicago, carried his son on his shoulders to the pitcher’s mound. He set him down and handed him a ball, which the child threw a short distance. The rapper was then handed a baseball, which he threw himself towards home plate. Both received applause for their efforts and Kanye carried Saint off the field, smiling.

OKAY @kanyewest JUST CAME OUT TO “HOMECOMING” AND THREW THE FIRST PITCH AT #CROSSTOWN!

Saint’s big sports moment, the collective dream of millions of baseball fans, took place a day after his older sister North West, 5, achieved her own exciting first; she walked her first runway show.

Kanye has been in Chicago over the past few days and has long professed his love for the city. He and Kim even named their third child and second daughter, who was born in January, Chicago West.

Kanye recently sparked relocation rumors by saying he was moving back to the Windy City and “never leaving again” during an open-mic event on the South Side. A source later told E! News that Kim “isn’t going to move to Chicago full time” although “she will be spending time there and supporting Kanye.”

The source noted that her businesses are in Los Angeles and that the reality star “doesn’t want to uproot the kids,” adding, “Kanye changes his mind about things often, so she isn’t going to make any big decisions. She is open to spending more time in Chicago, and they are talking about it.”

Watch Keeping Up With the Kardashians on Sundays at 9/8c only on E!

Staff Writer For Right-Wing News Site Dead After Falling Into A...