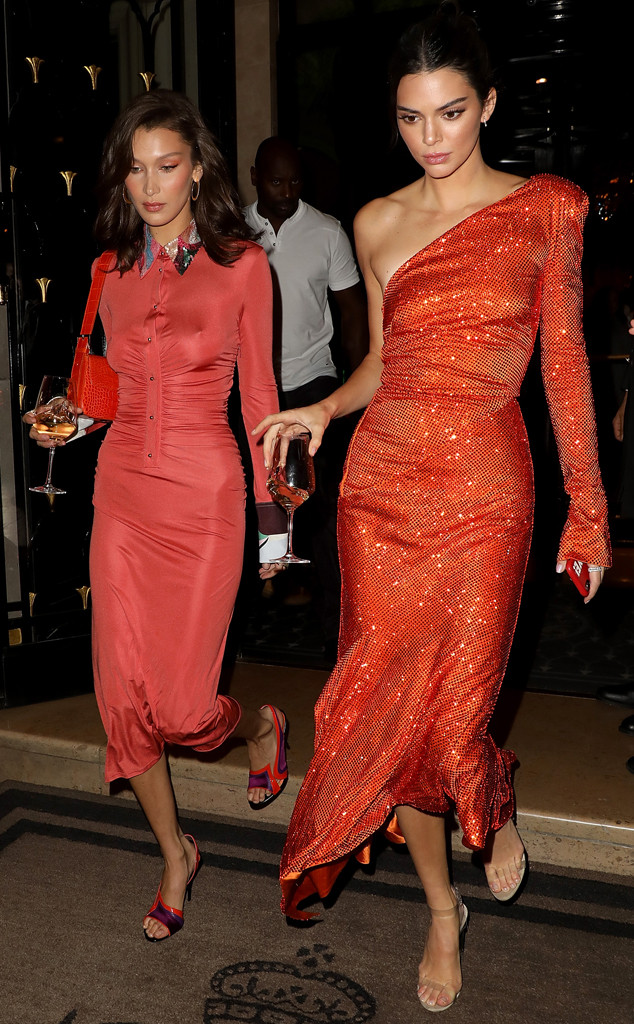 Imitation is the highest form of flattery.

Models and BFFs Bella Hadid and Kendall Jenner strutted out of the George V Hotel in Paris while en route to the American Embassy with their wine glasses in tow. It was the perfect homage to fellow fashion superstar Rihanna.

Both women wore flattering red dresses. Hadid donned a long-sleeved red dress with a multi-colored collar whereas the Keeping Up with the Kardashians star opted for a one-shoulder red sequin dress. They matched, of course, with their libations.

Rihanna’s love of taking her wine to go became more apparent in 2016 when Josh Edwards made nearly a definitive timeline of RiRi walking around various parts of the world with a glass in her hand. The Fenty designer’s wine and style of glass vary situation to situation. It doesn’t matter if she’s in casual clothes or a velvet dress: the wine is just as much a part of her outfit as anything else.

Where RiRi tends to match her wine color with her outfits (per speculation: she tends to drink red wine in dark clothing and vice versa), Bella and Kendall both drank vin blanc on their way to the event. Bella shared videos and photos throughout the night on her Instagram stories. In one video, she, Kendall and Rosie Huntington-Whiteley all made the stairs their mini catwalk as they blew kisses to the camera.

The models, who are coming just off the heels of New York Fashion Week and Milan Fashion Week, are most likely hitting similar fashion circuits as Paris Fashion Week kicked off on Sept. 25. Stay tuned if a glass of wine will accompany them down the runway.

This is a look! And the glass is the accessory (notice it matches her dress) pic.twitter.com/cJplI5z0on

In any country (this was in the UK) pic.twitter.com/H4YVxmkNGv

In June, the “Disturbia” singer provided just a tad more insight as to how she always manages to walk in public with a glass of alcohol without getting in trouble for violating any open container laws. She and her Ocean’s 8 cast stopped by The Graham Norton Show where Norton called her out for her wine-involved kleptomaniac tendencies. While looking at one photo, she told Graham Norton, “That might be the one I took to the club.”

Another time she was seen holding a nice glass of white while wearing a Balenciaga dress. “I took that back to the hotel where I took it from,” she rationalized. Only Rihanna would be able to get away with that.

Cocoa Sarai – "Coffee in the Morning"