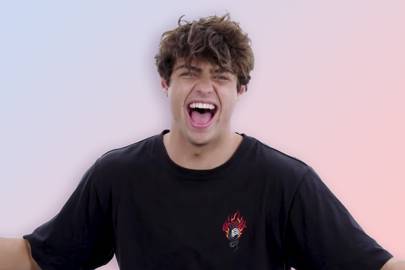 Noah Centineo is already a pro at driving Jeeps, twirling love interests around by the back pocket, and keeping popcorn bowls from spilling all over the place, but there are still a few things he hasn’t quite mastered. Many of them, as Allure recently discovered in a new video challenge with Noah, are basic beauty tasks that several people could do in their sleep. As hilarious as it is to watch the To All the Boys I’ve Loved Before star try and fail to braid hair and apply face masks, though, you’ve gotta give the guy props for trying.

In the video, Noah is tasked with doing nine things he’s never done before. Several of those things are fairly straightforward, and require no knowledge of hair and beauty routines. He gets the hang of tossing pizza dough impressively quickly, and his Elvis impersonation isn’t the worst in the world — even if he favours body rolls more than the King ever did. He also shows off his chops as a leading man by passionately reciting romantic passages from Romeo and Juliet (Leo DiCaprio, eat your heart out), and gazes deep into viewers’s souls while holding a boombox over his head like Lloyd Dobler in Say Anything.

The 22-year-old is much less successful at the beauty-related projects. First, he has to “braid a superfan’s hair.” He knows to split her hair into three sections and… that’s about it. With the braid rapidly falling apart in his hands, he triumphantly looks into the camera and shouts, “Ayyy! It looks great!” (Sure, Noah.) Next up, he attempts to guess the names of nail polishes based only on their appearance and, for some reason, their smell. Admittedly, this one’s an impossible feat, but that doesn’t make his guesses any less amusing. Nail polish companies, take note: All future dark purple shades should henceforth be named after the Teenage Ninja Mutant Turtles. It only makes sense.

Things take a dangerous turn when Noah is asked to straighten his own hair; he even mutters to himself, “I have so many friends that have just, like, burned the f*ck outta themselves.” Still, he forges on, running the straighteners over a small, oddly chosen section of his bangs. Last but not least, the actor clocks a little R&R time by applying four different face masks. While most mix-and-matchers use different masks to treat different skin issues, Noah takes a more devil-may-care attitude, smothering random sections of his face with each mask. After getting only a minimal amount of clay in his hairline and snapping a few selfies, Noah appears to understand the power of a good DIY spa treatment. “Guys. I have stuff on my face. And I’m lovin’ it,” he quips, before sinking into a deep bow. A+ for effort!

COQ10 Is The Skincare Superhero You Need To Know About

The Question: Find Your True Purpose By Bernardo Moya, An Extract