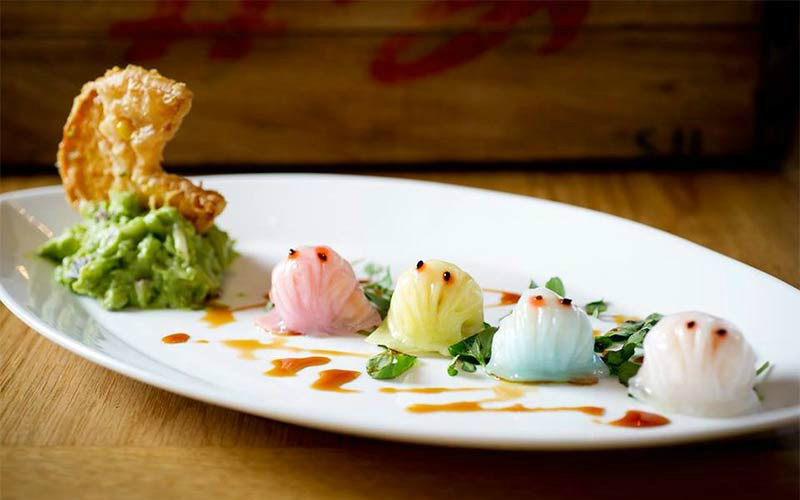 New York dim sum spot RedFarm has finally come across the pond and opened up in Covent Garden, right next door to other NYC import Balthazar. The restaurant occupies a fairly narrow space, which the RedFarm team has worked pretty well with, running a long communal table down the middle, adding raised tables for two down the left side and adding some bigger booths where it opens out slightly at the back.

There’s a fair bit of crossover from the NYC menu but there’s also been a definite London influence on some of the dishes too – the pastrami egg rolls, a big hit across the pond (rightly so because they are TASTY), are made with pastrami from Monty’s Deli in Hoxton rather than Katz’s Deli for example. The cheeseburger spring rolls are new for Covent Garden, and with a burger sauce for dipping, they really do taste like cheeseburgers.

Dumplings are the other RedFarm signature, especially those insta-famous Pac Man shrimp dumplings. And they’re exactly what they sound like; juicy shrimp parcels made to look like the arcade game characters, complete with a Pac Man head made from deep fried sweet potato. The pork and crab soup dumplings are even better, and they come with a handy little straw to make slurping the hot broth easier.

Although the menu is stacked with interesting sounding dishes, we think you could go heavy on the dumplings section and be very happy. We couldn’t resist the shrimp stuffed crispy chicken, which is essentially a giant prawn toast made with chicken instead of bread. It’s very generously stuffed and very crispy but needs the two dipping sauces on the side to ramp up the flavour. There are currently only two dessert options and really that’s all you need. Their squidgy custard baos are sweet enough to satisfy your sugar craving and small enough to ensure you leave without the need to unbutton your trousers.

RedFarm is on the more expensive end when it comes to Chinese food in London – you’ll defo be able to eat out cheaper in nearby Chinatown – but you find inventiveness and humour elsewhere. Or pastrami egg rolls.