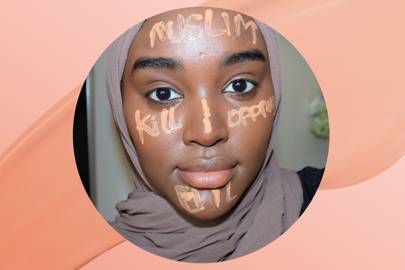 GLAMOUR’s #BlendOutBullying campaign is well underway, with so many people standing up to the online bullies to say that enough is enough.

Whether you use the words as contour, write a word on your lip and blend it in, or use concealer to cover up ink, it’s all about taking back the power from the bullies and creating an inspiring video to encourage others to do the same. You may recall blogger Nabela Noor’s viral video from December 2017, which showed her blending away the words ‘fat’ and ‘pig’ on her face to reveal a stunning makeup look, which has inspired the challenge at the heart of the campaign.

Here are just a selection of all your amazing videos and selfies – keep them coming!

No longer will we tolerate cyber bullying!! On a daily basis people all over the world are being bullied by people they don’t know and sometimes by people they do know all because of how they look, their sexual identity, their skin colour and so much more! I’m honoured to be a part of this movement with @glamouruk and many others out there like it! It’s been a while since I was bullied online – yea there was that person a while back after the release of the cyber bully film I was in. But she didn’t say anything hurtful really, she just trolled all my profiles and called my hair a mop ???????????????? How original! However in the past, and especially on FB, I’ve been called a Dyke and Butch… And as much as there are lesbians out there that identify as both, I don’t. I don’t like being called a dyke and let’s be honest, I’m no where near butch. And I was called this all because I wore a smart shirt and a tie ???? I laugh today, but back then, it hurt me immensely! • • • My skin is so much thicker than back then! I don’t tolerate hate of any kind. I refuse too! But I’m one of the very few who can easily brush it off. Who don’t take it to heart. Who read and very shortly after forget. We’ve lost too many young lives to cyber bullies. ????????????‍♀️ • • • The task here is easy. Take a stand with us and assist us as we #BlendOutBullying – post a selfie or video of yourself with any hurtful words you’ve been called online and then blend them out! And then use the above hashtag. I nominate all of you, and ask you to nominate other people when you post! ????????‍♀️????????‍♀️????????‍♀️????????‍♀️ • • • GLAMOUR U.K is also raising money for The Diana Award and you can donate by texting GLAM18 and the amount you wish to donate to 70070 (eg GLAM18 £3). • • • #thetimeisnow #blendoutbullying #haltthehate #notocyberbullying

“TOO FAT TO FUCK” ???? (lol spelt it wrong tho in the video innit) ????????‍♀️ Anwyays, when @glamouruk asked me “What was the most hurtful words you’ve experienced” , those four words came flashing before my eyes and it took me back to one of the saddest times in my life ???? The truth is… we really have no control over what others might say or think about us. To be honest, I think it’s just a reflection on that person’s own insecurities. Someone is always going to have an opinion and judge you as a person. But reality is… if my being upsets you … that really isn’t my problem ????????‍♀️ If you are true, kind, and you ain’t hurting nobody… I’m sorry that mofo who has something to say about you can take their words and shove it up their ???? I NOMINATE @malikoa @portiaferrari @elenabreschi , BUT ALSO EVERYONE & ANYONE TO JOIN ME TO #BlendOutBullying ???????? Sharing our experiences and blending away the words that once hurt us, allows us to forgive, heal and take back the power from bullying! ???? @glamouruk ???? is raising money for The Diana Award and you can donate by texting GLAM18 and the amount you wishyo donated to 70070 (eg. GLAM18 £3) ???? If you can’t quite manage a video, feel free to post a selfie ????

And of course, the amazing and inspirational women who helped us launch the campaign.

When we started this campaign, we wanted to find a way of showing the bullies that we’re taking back the power, and nothing spoke to us more than Nabela Noor’s video from December 2017. The beauty blogger took to her channel to write some of the most horrific things that had been said to her and blended them into an incredible beauty look. This strength and positivity inspired us, and we’re so thankful that we had Nabela’s blessing for the campaign.

THIS IS ME ???????? In 2017, I was called a pig, fat, ugly, a monster… I was told I should kill myself because of how I look. I received thousands of messages like this all year & there have been times where I let those words destroy me. But as my confidence strengthened, I became a fortress of self-love that could not be broken by the words of unhappy people. I learned quickly that happy people don’t say hurtful things. And that happiness begins with self-love. The girl I see in the mirror is beautiful with and without makeup, whether I am a size 6 or a size 16. So as 2018 begins, I’m leaving behind all of the words that once hurt me – all of the doubt that once controlled me. No one can tell us who we are. We are glorious. We are beautiful. We are worthy. This video is a small victory in my self-love revolution & I can’t wait to continue the fight in 2018. I am not the things they say I am. I will never be reduced to their words. I am brave, I am strong, I am who I’m meant to be. This is me. ???? P R O D U C T S // @farsalicare unicorn essence @beautyblender @maybelline master camo color correcting pen @urbandecaycosmetics brow box, naked skin concealer, blush in “video” @jouercosmetics lipliner tawny rose @doseofcolors liquid lip in truffle @toofaced chocolate gold palette, born this way concealer & peel off glitter liner @maccosmetics @patrickstarrr #macpatrickstarrr setting powder @kkwbeauty contour kit @hudabeauty jade lashes & winter solstice palette SONG: “This is Me” Cover by @emoniwilkins & @the7thaveband. Originally sung by @KealaSettle from the incredible movie #thegreatestshowman #wakeupandmakeup #tarte #hudabeauty #toofaced #makeup #tutorial #diy #instatut #beauty #makeuptutorial #wtfbeautyhacks #1minutemakeup #beautylook #benefitcosmetics #allmodernmakeup #makeupclips #eyeblogbeauty #hairmakeupdiary #makegirlz #beautyqueens4ever #melformakeup #transformation #peachyqueenblog

There are many organisations that help provide support and advice to people struggling with online bullying, but one making waves at the moment is Anti-Bullying Pro, from the charity The Diana Award, who we’re partnering with for this campaign.

The Diana Award was established in 1999 by the British Government who wanted continue Princess Diana’s legacy by establishing a formal way to recognise young people who were going above and beyond the expected in their local communities. In 2006, they became an independent charity, which enabled them to develop into a fully-fledged youth-led movement. Five years later, they launched their now world-famous Anti-Bullying Programme and later, in 2012, their Mentoring Programme.

You can donate to the campaign by texting GLAM18 to 70700 with the amount you wish to donate (ie GLAM18 £3). Just £30 trains one anti-bullying ambassador who can then go on to help countless others.

We hope you’ll join us to call time on online bullying.

What Your Lips Say About Your Health

Prescription Glasses: Why Frames Are The ‘Cool Girl’ Accessory