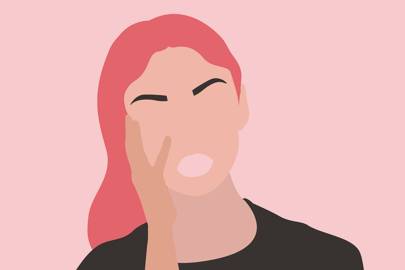 In her mid-twenties, balancing a stable job and a partying lifestyle, Annie Belasco was also on the hunt for a man. She wanted to find Mr Right, get married, buy a house, and live the life she’d always wanted. But then one day, she found a lump. Breast cancer: the two words that would derail Annie’s life.

Suddenly she realised how short her life had been, and the very idea of finding love seemed impossible. As her hair fell out, and her social life crumbled, her mental health deteriorated. She began to question if she would actually survive.

Struggling with an identity crisis and worryingly low moods, she wondered if she’d ever be able to live the normal life that had been within her reach only months earlier. Her new book, Love and Remission, tells the tale of a young woman in search of love and mental wellbeing.

At times heartbreaking and at times riotously funny: Annie Belasco tells her story of dating, cancer and mental-wellbeing, and why a traumatic experience can be the catalyst for truly turning your life around. Here, to mark Breast Cancer Awareness Month, Annie shares a poignant extract with GLAMOUR…

A GLAMOUR girl’s cancer diary: Getting the news

Wig on. Chest covered. Legs out. It was New Year’s Eve and we were buzzing. We opened the door of Karen’s flat and tottered down the steep steps. The view was just beautiful – dark skies, glistening navy blue sea, and stars everywhere. I’d been told to thank them a lot, and so I did that night.

We waited for our cab, got in when it came, and inevitably interviewed the cab driver all about his life. Was he doing overtime for work? What about his kids? Wife? Family? What did he have for dinner? He loved it, answering all our questions like he was on a chat show. And we had fun, just being us.

We got to the heart of the town centre and went into one of the busiest, dodgiest, chaviest clubs in Brighton. But we had so many good memories there that we were fine with it all. We were hardly drinking and sat for most of the night, but had an amazing time. I had gotten through the last six months without dying, something that had seemed impossible to me, and I was likely to get through the rest. What more could I want?

It got to nearly midnight and everyone was getting very excited. Then there was a big sound over the top of an anthem song. The countdown.

THREE, TWO, ONE … ‘Can we go outside for signal?’ I shouted louder.

We went outside – he’d messaged me back! This was so exciting. My message had been short and simple, but he must have liked my pictures and my description. Maybe it was because it was New Year’s Eve, but was messaging me. I felt like Jordan.

Breast Cancer Awareness Month: The best beauty buys that give back

We missed the stroke of midnight, but when we got back in, one of our songs was playing. So we started dancing and messing around. We danced, sang, twerked, and slut-dropped.

I noticed that there was an empty space on the dance floor, and suddenly I could see a rather plump, black cat sitting in the middle.

What an odd thing to be in a club, I thought, before my brain caught up with my eyes.

My £200 wig was dancing on her own on the floor of the club.

In slow motion, we removed our arses from the dance floor and Karen pounced on top of the wig that had left my naked head. I ducked down with one hand, trying to cover the stubble on my head before anyone else saw. Karen passed the wig back to me and slapped it onto my head like a rugby ball over the line. It went on. No one, that we were aware of, had noticed. Lucky escape.

A few hours later, we ended up in an overpriced cab trying to persuade the driver to pull over for a kebab.

This was going to be my last night out for a while. But if we couldn’t celebrate on New Year’s Eve, then when could we? No one knew us in that club, no one knew our stories, and no one knew I was any different from them. I didn’t know any of them either, and I had no idea what was going on in their lives.

Saddler Sam and I were messaging back and forth, two, three, sometimes four times a day. We were having really simple but nice conversations. Internet dating felt so crazy to me, to sit there in front of my laptop, having a virtual relationship with someone I didn’t know, their identification hidden. Who was this guy? He could be a nutter, just like Unwanted Phil.

‘What are you doing this weekend?’ he asked.

‘Oh, going out Friday and Saturday night and then meeting up for lunch on Sunday,’ I wrote back. I had to think on my feet and lie my little socks off, so as to not give my game up. This guy was alright and seemed nice, but what if he worked me out for what I was (a complete and total mess)?

If he found out that on Tuesday, I had spent all day in bed with aches and pains; that on Wednesday I went out shopping and was approached by a you-know-what hospice which sent me into turmoil; and that on Saturday I would be in bed, saving what little energy I had for my chemotherapy session on Monday, he’d definitely not be interested anymore.

This was challenging. Lying was stressful and very hard work, because liars can forget what lies they’d have told. Especially when the liar, like me, doesn’t lie a lot. But the person who receives them doesn’t forget the lies. I didn’t want to muck this up before I even met him.

‘I think we should speak. I want to talk to you properly,’ he had written.

Okay, this was good. But I definitely could not mess up.

We agreed a time – 7pm – with doors closed / privacy / no interruptions. Just me (and Dorothy, of course) waiting for the phone to ring.

It felt like I was waiting for ten minutes for the last digit to move.

‘WOOF!’ Dorothy barked, urging me to answer the bloody phone. I guess she’d become invested in the relationship.

ACCEPT (Obvs, who was I kidding?)

‘Hi, this is Sam.’ Very formal. Very to the point. Loud and direct. I liked it.

‘Oh, hiiiiii!’ I replied, acting surprised, like I hadn’t just spent the last half an hour staring at the phone, waiting for him to call.

We spoke for three hours, to be precise. We talked about his job, life, and family. And, just as equally, we talked about mine. We talked about London, the countries we had been to, the places that we wanted to go. We even talked about what we had for dinner. It was nice, it was easy, and it wasn’t awkward. It felt comforting talking to this man. He didn’t seem like he had a game to play. He was mature, direct, and really frank about everything. There were no grey areas; he was just all black and white like a mammogram without a shadow.

Eventually we said goodbye to one another. I reflected on our conversation all night. I missed talking to him already, I realised.

I needed to meet this man.

Love and Remission: My Life, My Man, My Cancer by Annie Belasco is on Amazon now.

We Spoke To Candice Carty-Williams About Her Hit Debut Novel, Queenie

Superdrug Is Only Stocking Foundations With Diverse Shade Ranges