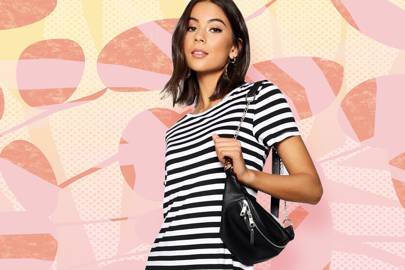 Remember that crazy phase where social media was just photos of people’s £3 meal deal lunches? It could be about to happen all over again – only this time, chicer.

Boohoo has announced the launch of a clothing ‘meal deal’. That’s right; our favourite sandwich/drink/snack combo has officially translated into clothing and for a not-so-shabby price of £30, you can bag yourself a new dress, bag and pair of shoes. A night-out game changer.

Not only that, but the range also includes super-casual trainers, every comfy cotton romper you could dream of and bum-bags over clutches if you’re looking for daywear.

And best of all? Although only selected items are included in the deal, it’s not just made up of unpopular clothes they’re trying to get rid of, and there are actually some pretty chic mix-and-match looks to be had with an average saving of £17. And with a selection of on-trend leopard print dresses, outfits to take us through to the winter season and espadrilles we’re already eyeing up for next summer, what’s not to love?

The innovative deal has only just launched but is already getting tonnes of positive feedback from students and fashion fans alike.

Boohoo have created a “meal deal” for students which is an outfit including heels and a bag for £30. Love it.

As if my shopping addiction wasn’t bad enough, Boohoo have really started doing a ‘meal deal’ where you get a dress, shoes and a bag for £30 r u joking me????????

We’re already curious to see if the new meal deal concept causes as much controversy as the original “who even gets plain ham and ready salted crisps?” debate…but with more jumpsuits.

Taylor Swift’s You Need To Calm Down Is The Anti-Homophobia Anthem...

The Leandra Medine Shoe Collection You Never Knew Your Needed