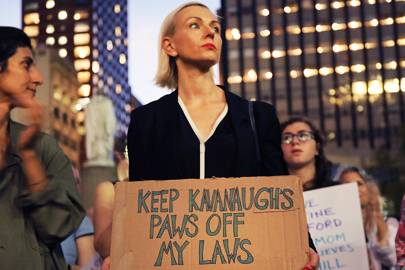 Despite the brave testimony of Dr. Christine Blasey Ford, who accused him of sexual assault and protests of groups across the nation, Kavanaugh joins the highest court of the land and replaces retired Supreme Court Justice Anthony Kennedy.

Dr. Ford’s supporters hoped that her taking her allegations to the Senate and giving an undoubtedly difficult account to the judiciary committee would be enough to sway the vote.

Emily Ratajkowski and Amy Schumer were arrested during a protest about his appointment in Washington D.C

When the result was announced, protestors screamed “Shame! Shame! Shame!” and “I do not consent!” from the public gallery.

Thousands of other protestors surrounded the Supreme Court Building and U.S. Capitol to vent their anger at the decision.

And around the world, Kavanaugh’s confirmation caused strong reactions on Twitter. Not just anger but also heartbreak, disappointment and many expressing how they were sad but not surprised.

Not sure why anyone would be shocked or surprised by Brett Kavanaugh confirmation, look at who you elected president. This is a country where a black man can get murdered in his home & the cops will look for evidence against the dead person not the shooter. Nothing surprises me.

I can’t get over the cruelty of the whole #Kavanaugh process. The fact that the GOP demanded the public anguish of Dr. Blasey Ford and other survivors despite knowing full well they would never, ever take that testimony as evidence. It was a brutal, cynical flaunting of power.

Sadly, not only has #Kavanaugh been confirmed today but it has also confirmed that America is now broken beyond repair.

Kavanaughs confirmation further proves that America has SO much work to do as a country.

Messages of Hope and Encouragement

Both reaching for our bags in the overhead he said: “I’m not usually this guy, but please keep doing what you do. We need to hear voices like yours. And I need to listen.” I could feel his heart. Grappling with the moment in his own skin. We spoke for a bit and then deplaned.

We’re deeply disappointed in the outcome of today’s Senate vote. Even though we didn’t get the result we wanted – the result we needed – it’s not the end of our fight.

We thank Dr. Blasey Ford and every survivor who heard the sound of their own voice this week.

If seeing Brett Kavanaugh confirmed and Mitch McConnell smugly smiling isn’t enough to get you motivated for one month from today, November 6 – don’t know what will. #resist

It will be up to voters to make Republicans pay for every single anti-woman, anti-LGBTQ, pro-corporation ruling that Kavanaugh makes.

There must be accountability for putting a partisan liar credibly accused sexual assault on the highest court.

Meghan Markle Is An Empowered Woman So Why Do We Insist...

The Best Reality TV Shows To Binge-Watch If Your Missing Love...