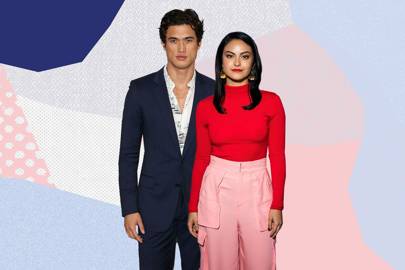 Remember when we found out that Cole Sprouse and Lili Reinhart were actually a couple IRL?

Well, strap in because we’re about to get hit in the feels all over again. Rumours started circulating that Camila Mendes and Charles Melton AKA Veronica and Reggie from Netflix‘s Riverdale, are officially an item and now we have all the proof we need that it’s true. MAJOR.

Camila took to Instagram to share the cutest picture ever of Charles planting a kiss on her face, with a caption that says “Mine.”

The picture comes after the pair were spotted with fellow Riverdale castmates Casey Cott and Lilli Reinhart on their way to a film earlier this week – and according to E! News, they were even getting loved up sharing a cheeky kiss in front of onlookers.

“Camila sat next to Charles and leaned on his shoulder,” a source told E! News.

“As the lights were dimming, my friend saw them kiss.”

Back in August, Camila *finally* posted an Instagram snap of them together, which we took as confirmation that all of our couple goals were coming true, but then die-hard fans were quick to point out that Camila suggested in an interview that she would never date an actor.

“Actors are really emotionally complicated,” she told Nylon. “You would think they would be more in tune with their emotions, but sometimes they’re just not.

“I just really need to get out of this industry with someone who is in a stable environment.”

We’d probably make an exception for Charles Melton too…

There’s a death coming to Riverdale High School, here’s everything you need to know about season 3

How The Wellness Industry Boomed Thanks To Gwyneth Paltrow

Keep Your Little Ones Sweet With This Christmas Gift Guide For...