There’s a new mom in town.

After first being introduced on 16 and Pregnant in 2009 and going on to continue documenting their journey on Teen Mom beginning in 2015, Teen Mom OG stars Catelynn Baltierra, Maci Bookout and Amber Portwood are dealing with a first in the MTV reality hit’s long history: new cast members.

In last night’s premiere, Bristol Palin and Cheyenne Floyd made their debuts as Teen Mom OG‘s newest stars, but it’s not the first time either new cast member has been on TV before or dealt with their complicated relationships playing out in the public eye.

Bristol became a tabloid fixture in 2008 when her mom Sarah Palin ran for Vice President of the United States, with the then-17-year-old making headlines after announcing she was pregnant on the first day of the Republican National Convention, making her one of the nation’s most famous teen mothers. After welcoming her son Tripp (with ex fiancé Levi Johnston), Bristol went on to star in her own Lifetime show in 2012, Bristol Palin: Life’s a Tripp, and competed on Dancing With the Stars in 2010 and 2012. (Full circle moment: Tripp, 9, is now a competitor on Dancing With the Stars Juniors.)

Now 27, Bristol went on to have two daughters, Sailor Grace and Atlee Bay, with Dakota Meyer, though the couple finalized their divorce in August after getting married in June 2016.

Cheyenne, 25, has been a familiar face on MTV for several years: She first appeared on season three of Are You The One?, before going on to join the cast of The Challenge: Rivals III in 2016, which is where she met Cory Wharton. After hooking up following the filming of that show’s reunion, Floyd learned she was pregnant, and the pair revealed they had a baby girl, Ryder, in December 2017.  Cory continues to be a fixture on MTV’s reality shows, participating on The Challenge and was recently a cast member on Ex on the Beach. (Consider him MTV’s reality triple threat!)

Given Bristol and Cheyenne’s previous IMDB-worthy outings, it is a bit strange at first to compare them to their fellow Teen Mom OG stars, as Maci, Amber and Maci started living their lives in front of the cameras when they were just 16, literally growing up and raising their kids for all of MTV’s audience to see. 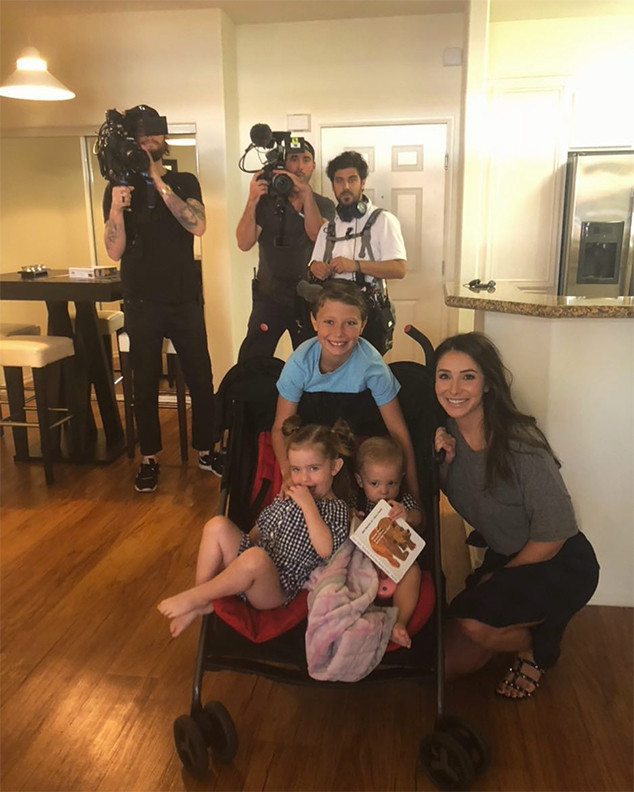 Because of her background and already pretty high profile, it seems not everyone was happy about Bristol joining the show.

A source told E! News some of the cast members were “surprised and shocked” to see that the producers cast someone outside the Teen Mom family, as other shows in the franchise have pulled from other seasons to fill out the cast. (See: Teen Mom 3‘s Briana DeJesus joining the cast of Teen Mom 2 in 2017.) They were under the impression that Teen Mom 3‘s Mackenzie McKee would be joining them, per our insider.

And on the Teen Mom OG “after the show” special after last night’s premiere, Catelynn said she found out about Bristol joining the show from TMZ. “I had no feelings at the girls at all,” she admitted, “You know, just a phone call would’ve been nice.”

Even Cory, a fellow newbie, wasn’t happy about how Bristol’s casting announcement went down, saying he and Cheyenne couldn’t “compete” with Sarah Palin in terms of media coverage.

“Nothing against Bristol, it was more just communication on the network side of things,” he  said on The Domenick Nati Show. “We weren’t upset, we just thought it was a little funny how things went. No one likes to be in the dark. We were definitely a little questioning things, because we were filming a good month or two before she even started to film, so it was strange that she was getting promoted before us.”

In a “Meet the Moms” special ahead of the season eight premiere, Bristol and Cheyenne met the returning cast members for the first time in front of the cameras, and while there was some initial awkwardness, the meeting went well. “I just want to be like cordial and like friendly and just have a good freakin’ season,” Amber said before leading a toast with the “Old Gs and the New Gs.”

But Catelynn’s husband Tyler Baltierra, who has also been on the show since it premiered, did not hold back during a recent interview on the Reality Life With Kate Casey podcast.

“Do I think it’s weird as hell? Absolutely,” he said of Bristol being cast. “Do I think it’s a really, like, not a good decision for the franchise? Yeah, but that’s out of my control.”

But he did go on to say he doesn’t fault them for taking the opportunity.

“Do I have any hard feelings against the girls, the people participating in it now? Absolutely not,” Tyler said. “Because I think with the franchise—like, what it turned into—if the opportunity knocks on anyone’s door, I think everyone would be lying if they said they wouldn’t take the opportunity. Honestly, things evolve, they gotta grow and they gotta adapt to change as we get on with this whole thing that we’ve been doing for 10 years now.”

But why did Bristol want to open up her life to public scrutiny again, with her personal life already being reported about without it being filmed and aired on TV.

“I think I’ve grown up so much in the last 10 years. And I think God gave me this platform to be on this show to open u my life and discuss things that are going on or that I’m passionate about,” she said on the after-show. “If I can help or encourage others I think that’s what God wanted me to do.”

Her mom will make appearances on the show and already popped up in the premiere, and was supportive of Bristol joining the cast from the start.

“We’re not doing the reality star type thing,” Sarah  told TMZ. “[Bristol] sees this as a venue, as a forum for good, to help people in a hurtin’ world so I encourage her to do this. I support her doing this and I’m proud of her.” 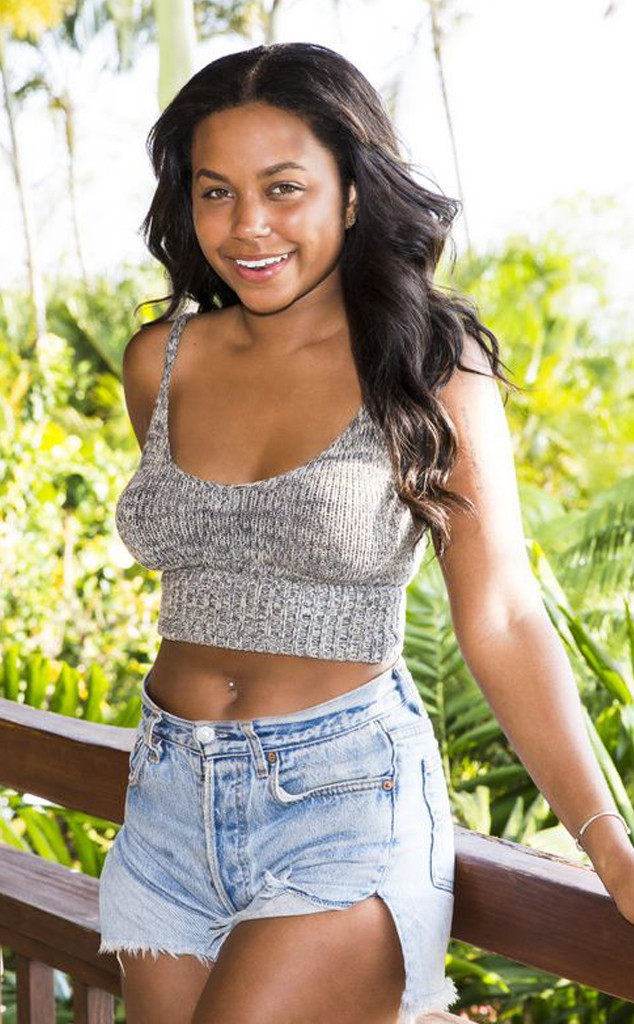 While Bristol was a teen mom, Cheyenne found out she was pregnant when she was 23. So, no, she was never a “teen mom,” but she defended her place on the show on the after-show.

“I think I fit in because we’re all around similar ages now,” she said. “We’re all raising kids…I think I go with what the show represents.”

Given Cheyenne and Cory’s appearance on various MTV reality shows over the years, some have accused the co-parents (whose will-they-or-won’t-they seems likely to play out over the course of the season) of joining the show to continue being on TV and bringing “the drama.” (Several of Cory’s The Challenge friends have already made cameos and we’re only one episode in.)

Cheyenne said, “That’s wrong because on the past show I didn’t bring the drama. I was always quiet and they always said I was boring…and it was a great opportunity. It was a chance for Cory and I to tell our story the way that we wanted everyone to find out, so we took the opportunity. If that means we did too many shows, so be it.”

But the most jarring aspect of Bristol and Cheyenne joining the show for fans might just be the relationship–or lack thereof–they have with the show’s producers, who have had a significant on-camera presence since Teen Mom OG decided to break the fourth wall in 2015. Many of the producers have been with Maci, Amber and Catelynn throughout their journeys and have provided support during some of their toughest struggles.

“I think the hardest part of this job is the emotional toll it takes on you as a producer or a crew member to walk this life with your cast member,” co-executive producer KiKi Malone said when addressing Catelynn’s miscarriage in season seven. In the episodes, we saw Catelynn talking open and honestly about her suicidal thoughts with her producer, Kerthy Fix, who later went to Tyler about the conversation, comforting him as he broke down.

“It’s so brutal to care about these people in that way and not be able to fix it,” KiKi, whose been with the couple for nine years, said.

Watching the premiere then, it was almost bizarre to see that same producer Kerthy, along with Kristen, informally interviewing Bristol and Dakota about their relationship, which she doesn’t have a full grasp on because she hasn’t been there with Bristol throughout the ups and downs of their marriage and his struggles with PTSD. At one point while talking to Dakota and his father, Mike, she even said, “Can I switch topics a little?”

It’s a completely different dynamic than viewers have previously seen between a producer and a cast member on the show.

Of course, it makes the producers’ jobs easier to not have to worry about interfering in a scene if they know it’s OK for them to be on-camera.

“It’s better for the audience because they know there are cameras present; they know that there are producers,” producer JC Cueva (who worked with Kaila Lowry on Teen Mom 2 before some drama went down and she allegedly fired him) told MTV. “It helps me tell the story better sometimes, because if I have a question, I can just jump in and ask it. I don’t even think about it, I just do it.”

For Bristol and Cheyenne, it’s not just connecting with their producers though; they’ve got to win over their co-stars and the viewers, too.

Rapsody’s New Album Is A Tender Ode To Black Women