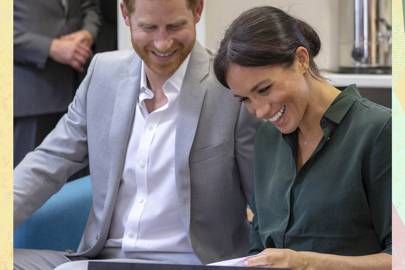 As if the wedding of the year wasn’t enough to make us fall in love with Prince Harry and Meghan Markle, them getting their first dog together almost made our hearts burst.

The latest palace pup is a rescue dog that they adopted earlier this summer. It will be splitting its time between Meghan and Harry’s Nottingham Cottage in Kensington Palace and their country pile in the Cotswolds, and making their lives even more perfect. We could make a joke about a dog’s life, but we’re too busy crying with jealousy TBH.

However, it turns out that everything we thought we knew about the new addition was totally wrong.

It was originally reported that the new dog was a Labrador named ‘Oz’, but during their first visit to Sussex this week, the couple took a moment to low-key troll everyone about the all-important details we’ve been waiting for.

They were gifted a drawing of their OTHER dog, Guy, before reminding everyone that we haven’t even seen their new dog yet – and it turns out she’s a HER.

Meghan is a major dog person and this new arrival is the second in the Sussex household. She brought her beagle, Guy, with her from Toronto when she moved to the UK, and he even got to attend the reception after their wedding in May. She also had a rescue dog called Bogart, but sadly had to leave him with friends because he was too old to travel.

So the new royal Rover will have plenty of pals – Prince William and Kate Middleton have an adorable English cocker spaniel called Lupo.

We’re sure this latest royal Rover will be besties with him and, of course, the Queen’s beloved corgis in no time.

Anti-FGM Campaigner Nimko Ali On Why Sexual Pleasure Is A Fundamental...