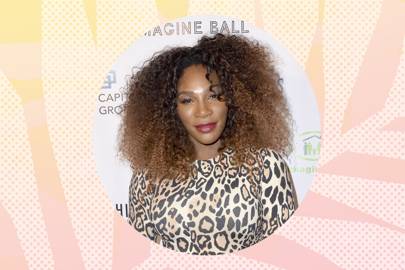 In honor of Breast Cancer Awareness month, tennis legend Serena Williams proved she was the G.O.A.T. once more by posting a special message to Instagram—and it’s in the form of a music video she’s actually singing in.

In the video, supported by Breast Cancer Network Australia, Williams performs a cover of the Diviynls’ classic hit “I Touch Myself.”

“This Breast Cancer Awareness Month I’ve recorded a version of The Divinyls global hit ‘I Touch Myself’ to remind women to self-check regularly,” Williams wrote on Instagram. “Yes, this put me out of my comfort zone, but I wanted to do it because it’s an issue that affects all women of all colors, all around the world. Early detection is key—it saves so many lives. I just hope this helps to remind women of that.”

Watch the video for yourself, below:

According to Williams, the music video is part of the I Touch Myself Project, which was created in 2014 as a tribute to Divinyls lead singer Chrissy Amphlett, who, according to the project’s website, “gave us her hit song to remind women to put their health first.” Amphlett died of breast cancer in 2013 while concurrently battling multiple sclerosis.

Beyond dropping a music video, it’s been a whirlwind month for Williams, who recently lost the U.S. Open to Naomi Osaka. During the match there was controversy with the presiding umpire, who made calls many saw as unfair and sexist against Williams.

“I’m gonna continue to fight for women,” Williams said after the game. “The fact that I have to go through this is just an example for the next person that has emotions and wants to express themselves, and they want to be a strong woman. And they’re gonna be allowed to do that because of today. Maybe it didn’t work out for me, but it’s gonna work out for the next person.”

Deciem Founder And Creator Of The Ordinary Is Shutting Down The...

The Watermans Grow Me Shampoo & Conditioner Has So Many 5-Star...