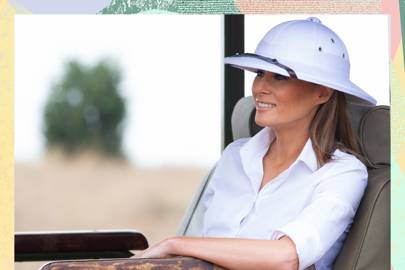 Having already offended most people in her own country thanks to an ill-advised stiletto and a bizarrely brazen parka jacket, Melania Trump took it upon herself this weekend to take her sartorial disasters on tour.

First on the list? Why, a pith helmet for her safari in Kenya, of course.

First worn by European explorers to cope with warmer climates, it soon became the recognised uniform of British soldiers who colonised Africa and India in the 19th century before spreading to civilians and becoming a symbol of oppression and colonial rule.

Unsurprisingly the First Lady has come under fire for her choice of 19th century-style headgear thanks to its close connection to European imperialism, prompting people to question whether or not she actually has anyone advising her. (Not that you should need advising against wearing something with direct ties to such oppression but… you know… it’s Melania).

Melania Trump travelling through Africa in a pith helment, the hat colonials wore. Do these people have advisers?

Melania Trump wearing a pith helmet on her trip to “Africa” is more than a silly sartorial choice. It’s a reflection of her outdated understanding of Africa. (Also, she was photographed in safari attire multiple times on this trip.) #FLOTUSinAfricaBingo https://t.co/aCnkOnPBF8

Melania Trump went on a safari in Kenya wearing a pith helmet – a symbol of European colonial rule across Africa ????????‍♂️ pic.twitter.com/JSvNghTs3p

thank you Melania for your re-colonization in Africa. The style of your hat to leave so many wounds in the hearts of Africans

Trump’s apology? According to the Washington Post, the First Lady said: “That’s very important what I do, what we’re doing with U.S. aid and what I do with my initiatives and I wish people would focus on what I do, not what I wear”.

Perhaps if she stopped wearing outwardly offensive clothing then people would stop focussing on what she’s wearing? Just a thought.