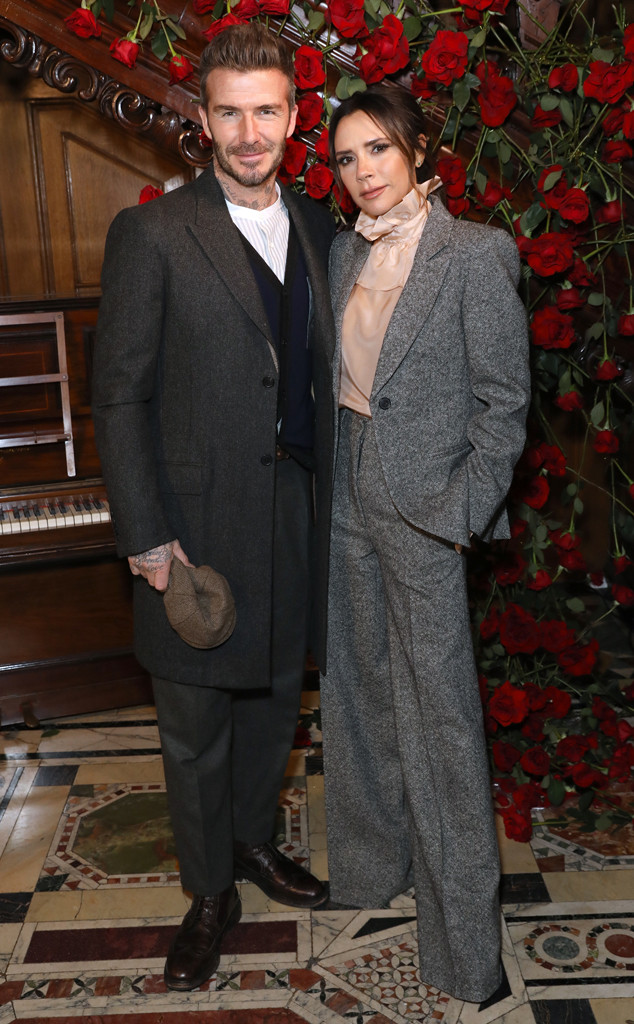 Spotted: some PDA from Mr. and Mrs. Beckham.

While Victoria Beckhamand David Beckhamaren’t known for over-the-top displays of affection, the married couple of nearly 20 years puckered up at a rare public moment on Sunday.

It was a stylish occasion for the A-list twosome as the couple stepped out at the presentation for David’s Peaky Blinders collaboration with Kent & Curwen during London Fashion Week Men’s.

Ever the fashionable pair, David donned a sweater vest and pants layered under a dark gray coat while Victoria opted for a tailored heather gray tweed suit from her eponymous collection paired with a blush blouse.

At one point during the event, the two were photographed giving each other a kiss on the cheek, perhaps a congratulatory one for the designer’s leading man.

“This collection was very honest and true to David and his style,” she told WWD. “And the show was beautiful, too.”

The famous parents were joined by their oldest son, 19-year-old Brooklyn Beckham, and his new girlfriend, model Hana Cross.

“Proud to have my family by my side to watch this morning,” the soccer star noted on Instagram.

The doting mom and dad rang in the new year with all four of their little ones just days ago. “Lots of kisses from us all!!” the Spice Girls alum wrote to fans earlier this week.

Despite the divorce rumors that popped up in June, it looks like one of Hollywood’s lasting couples is going strong. As Victoria previously told British Vogue, “People have been making things up about our relationship for 20 years, so David and I are pretty used to ignoring the nonsense and just carrying on as normal.”

And they have their upcoming 20th wedding anniversary in July to show for it.

Jonathan Van Ness Reveals He Almost Friend-Zoned His Boyfriend When They...

This Is Us Premiere: Hilarious, Heartbreaking, and Filled with New Questions