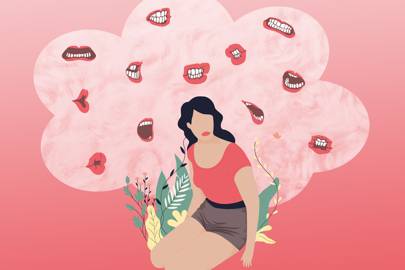 After facing a backlash to a piece about wellness routines in The Times, writer Madeleine Spencer decided not to let it affect how she went about her day. Here, to mark Safer Internet Day and to continue GLAMOUR’s plight to #BlendOutBullying, she explains what happened and how she overcame the online trolling…

My road to becoming a working journalist wasn’t an easy one. Diagnosed with agoraphobia and anxiety disorder in my late teens, I struggled to be in offices every day and therefore could rarely complete the internships that were, I was told, the key to finding work in a hugely competitive industry. I persevered, maintaining that words could be written from anywhere, and continued to pitch ideas and take any jobs that came my way.

Eventually, I broke through, spending short stints in offices and being offered features remotely by editors who were sympathetic to my plight and who understood that we don’t all operate in the same way. I also started a blog, which meant that I could build a readership independently and carve out an online community that way.

A lot of my work was in the beauty and wellness field, and as my career gained momentum, I met plenty of experts who offered insights into things I might do to make my mind and body calmer, less prone to wobbles, more biddable. I tried some of the things recommended, discarded others, and kept those that would help me and could be included in a routine that would become, it transpired, instrumental in keeping me on an even keel.

Today, as a result of that routine, I’m occasionally anxious and office-averse, but able to travel and work and sometimes even forget that my life was once so governed by anxiety.

And that is precisely why I feel strongly about sharing tips – had it not been for the collective wisdom I encountered, I might still be confined to a one mile radius around my house, struggling to swallow when nervous, finding tube travel untenable. That conviction that the things we do daily have a huge effect on us is why so much of what I write is therefore not only to recommend products, treatments and practitioners that I’ve found excellent, but is also written in the hope that some of my readers might end up feeling a little better about the way they look and feel, and that this will have a ripple effect on the rest of their lives.

Mostly, the feedback I get is overwhelmingly positive, and I interact with followers who want advice on anything from acne to anxiety daily.

But my experience of being online soured hugely after I was profiled in a piece that went viral in the Times documenting the routines of four people who’d incorporated wellness into their daily lives.

For daring to share how I went about my work days, I came under fire, even though, had anyone asked, I could have offered perfectly reasonable explanations for every element. For example, I used to suffer terribly from indigestion prior to going to the famous VIVAMAYR clinic in Austria, where they taught me to give my gut a hand by taking good quality probiotics (I now swallow a shot of Symprove first thing every morning), chewing my food diligently, and by respecting that not all bodies are built in the same way and that no two people thrive on precisely the same foods or routine.

Other parts of my day that caused consternation included tongue scraping in the morning to limit the build up of bacteria, which my dentist told me could lead to toxins on the tongue and halitosis, and lying on a Yogi Bare ‘Bed of Nails’, a sensation which I liken to a rather intense reflexology session and is circulation-stimulating and relaxes me.

I am also a fan of routine in general and like to eat thrice daily without snacking and find getting enough sleep is important to safeguard my mental and physical health.

Ever been trolled online? These are the simple steps you need to know about to protect yourself

While doing – or not doing – any one of those things doesn’t have a huge impact in and of itself, together, these small daily practises offer me the framework that means I can handle an especially stressful week without falling to pieces. It also means that when I choose to deviate from it by, say, eating lots of sugar or going out very late, I’m not too impacted as I can slip back into my routine afterwards safe in the knowledge that my mind and body thrive when sticking to it.

But nobody asked, and the backlash came without any curiosity as to why the subjects of the piece did what they did.

This was especially the case on Twitter, where prominent figures directed scorn in the direction of those featured.

As a result, in the aftermath, we were called everything from indulgent to misguided – and my day went from glee at having friends message to tell me that my picture was on the front page of Times, to complete misery as I fielded messages and saw responses flood in after India Knight tweeted ‘there is an amazing piece about “wellness” in the Times,’ Ian Dunt said ‘imagine having to spend a single second in the company of these dimwits,’ and Ian Marber asked ‘is it wellness or delusion?’

The responses were savage and nobody thought to question why anyone found the routines of others so very upsetting. One person tweeted to say that we needed ‘a good fry-up. Then a smack in the mush with the pan,’ while another posed this question: ‘imagine thinking about yourself that much and how full on boring it would be?’ Many took umbrage to the fact that we all found comfort in being regimented, and vocally told us that we were boring, should be friendless, must be shamed.

But there were also people who came out in droves to support me – and to remind me that I didn’t need to justify my routine; it was my body, my life, and I was merely laying out what I did for anyone who cared to read, and who might just as easily turn the page, ignore the piece and not take to twitter to attack those featured. My friends reminded me that I was loved irrespective of what I chose – or chose not – to include in my day and invite into my body.

Today, on Safer Internet Day 2019, my hope is that perhaps more people will, like my friends, choose to let people tell their stories without judgement, take stock of the effect their comments can have, and think twice before adding reproachful tweets to a thread.

The whole thing stung. There’s no getting away from that. But after taking a step back in the week after the article, I have decided to carry on as I was. The fact that so many people saw fit to criticise or poke fun without asking questions says a lot more about what they choose to do with their time than it does about how I spend mine. And, besides, I fought too long and too hard for my career to let some disparaging remarks silence me.

Read tips from The Diana Award on how to protect yourself online. The Diana Award, Anti-Bullying Programme trains young people to tackle bullying and change culture, online, in their schools and in their communities. It costs just £5 to give young people access to resources so that they know what to do if they, or someone else is being bullied. Donate to help us tackle bullying online and offline. For good.

What Is Kindness And How Can We Practice More Of It?

Ryan Reynolds Opens Up About The State of Masculinity