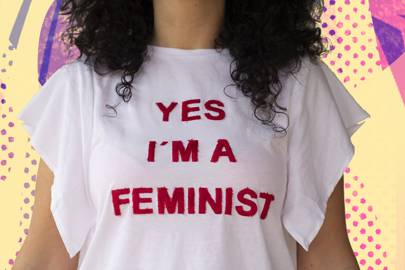 A hundred and eleven years ago, female garment workers in New York City went on strike – 15,000 people taking to the streets to call for better pay and improved political and economic rights. The textiles workforce, mainly comprised of Jewish and Italian immigrants, was nearly three quarters women. The following year in 1909 the inaugural International Working Women’s Day came into being to commemorate this historic event.

It signalled the beginning of an ongoing period of dissent in the US, 1909 also seeing the shirtwaist workers’ strike – also known as the Uprising of the 20,000 – led by the 23 year old Clara Lemlich, and the International Ladies’ Garments Workers Union. Wages were terrible, work hours ludicrously long and building conditions hazardous. Several months into the strike, factory owners capitulated to their demands for change. But it wasn’t enough. Only a year later, the Triangle Shirtwaist Fire happened. 146 garment workers died, unable to escape the blazing building because doors had been locked and exits blocked in a bid to stop those inside taking unauthorised breaks. The vast majority of the victims were young women.

It’s a bitter history. One of injustice and profit prioritised above human rights, and human lives. But it’s also a history testifying to the power of female-led action. Action that’s especially crucial to remember this International Women’s Day. After all, it’s what laid the foundations for it.

Sadly, however, those self-same conditions that precipitated IWD remain more relevant than ever and to mark our #EveryDayIsWomensDay digital issue starring Gemma Chan, we’ve delved into the issue – and how it’s still so prevalent today. Just over a century on and the contents of our wardrobes have much to reveal about the appalling ways in which corporations and countries treat women. The global apparel market is vast, now worth more than $1 trillion in retail sales. A continual appetite for new, cheap garments – many disposed of again quickly, with the UK alone sending more than a million tonnes of clothes to landfill each year – has been stoked by brands seeking out quick, cost-cutting ways to produce the stock we find so enticing.

The cost, of course, comes further down the supply chain. Currently 80% of garment workers employed worldwide are female. Just over a century on, they’re still unanimously being underpaid, overworked, and systematically denied basic rights. And the consequences continue to prove fatal. In 2013, the collapse of the Rana Plaza building in Dhaka, Bangladesh (the country is the world’s second largest exporter of clothes), led to a death toll of more than 1100. It happened only months after a factory fire in Tazreen where 112 garment workers died.

Although there have been some small advances in legislation since then, there’s still an immensely long way to go. In fact, investigative work from The Guardian revealed that on two separate occasions in the last few months, charity t-shirts boldly proclaiming female-friendly slogans like ‘Girl Power’ (for F= ) and ‘#Iwannabeaspicegirl’ and ‘gender justice’ (for Comic Relief) had been produced under distinctly less than female-friendly circumstances – with workers facing harassment, untenable overtime, and extremely low pay.

Produced in different factories in Bangladesh for the same Belgian brand Stella/Stanley, hourly rates varied from 35p to 42p an hour. In January of this year, 50,000 Bangladeshi workers went on strike, after the minimum wage rose to just 8000 taka (£71.34) a month – estimated to be a mere 9% of what a living wage should look like. Many were fired for doing so. In another factory supplying Stella/ Stanley, a woman sitting on the anti-harassment committee was attacked on the orders of management and threatened with murder.

These t-shirts are notable because they’re an easy way to encapsulate the hypocrisy of a message that doesn’t reach the makers – ‘gender justice’ only, apparently, applying to consumers. They also illustrate the murky nature of supply chains, with products going through numerous hands and companies along the way (in both instances those at the top said that they’d researched the ethics of their suppliers, and were shocked at the news, immediately pulling the products). But they’re just examples of a much wider problem. One that means there are plenty of large-scale corporations out there denying responsibility for the dire circumstances they’ve been encouraging for decades.

It’s something Tansy Hoskins, activist, journalist, and author of Stitched Up: The Anti-Capitalist Book of Fashion, has been researching for years. “There wouldn’t be a fashion industry without the exploitation of women,” she says bluntly, outlining the many challenges faced by female garment workers today, the vast majority of whom are in the Global South (where they already face huge societal inequality). From low wages to serious health and safety hazards to “not allowing freedom of association and trade union rights,” the problems are manifold – and devastating. High end and high street brands alike do little to ensure the wellbeing of those making their clothes – sluggish to act on sustainability and safeguarding, even when encouraged by the government.

Safia Minney, former CEO of Fairtrade label People Tree and author of Slave to Fashion, agrees, adding that sexual harassment in factories remains another grim norm. “[Women] are teased and asked for sexual favours and often suffer physical and psychological assault – which makes it difficult to negotiate for better wages and stay in a position long enough to get benefits of maternity leave, paid holidays, and the opportunity of training and promotion.”

In fact, as a series of reports released in 2018 from the Clean Clothes Campaign and Asia Floor Wage Coalition showed, gender based violence is widely evident in the supply chains of retailers including H&M and GAP . “There needs to be a hot line that they can access anonymously so as they can report issues in the work place,” Minney adds. “Brands are starting to take grievance mechanisms seriously and follow through with their suppliers… [but] offenders need to be punished, and procedures and practices improved to protect women.”

“Within trade unionism, you, as a young woman, will find one space where your voice is actually heard and respected,” observes Tansy Hoskins, “because you’re joining your voice together with the voices of all the other women in the factory and becoming a powerful bloc that can challenge the managers of the factory, the owners of the factory, and further up the supply chain the brands as well… That’s why it’s particularly dangerous and poisonous when fashion brands go to countries in the Global South and disrupt this process by encouraging the outlawing of trade unions or collective bargaining.”

Fashion’s problem with women isn’t exclusive to one end of the production chain either. It’s rife throughout, from boardrooms to catwalks. Models, who often face their own litany of exploitation and unreasonable demands, have formed their own unions in response, while reports like Glamour’s ‘Glass Runway’ point to a world in which women spend three times as much as clothes on men, but occupy only 14% of executive positions at major brands. It’s the entire industry that needs an overhaul.

One such alternative might be a brand like London-based Birdsong, where, as co-founder Sophie Slater explains, “we commission women’s community groups and charities to make everything, working with only the most talented, and highly trained seamstresses and knitters… We recognised through our previous roles in charities that many older women and women from migrant communities have incredible, highly professional crafting skills, but are locked out of the fashion industry because of institutional barriers. Birdsong was created with the aim of providing living wage work opportunities to women facing barriers to employment.”

Can the high street *ever* be sustainable? GLAMOUR investigates…

Tansy Hoskins also suggests that rather than view ourselves purely as consumers, we instead consider our role as citizens – ones who can’t shake the system merely by voting with our purses. “Something like Rana Plaza was not the fault of… people shopping. It was the fault of the person who owned that building, the fault of the individual workshop owners and managers, the Bangladeshi government for not having a proper inspectorate, and also for the brands commissioning work that deliberately had such low returns attached to it. We have to keep an eye on where responsibility actually lies.” She advocates getting involved with existing campaigns, writing to MPs, going on demonstrations, and lending both feet and voice in support of those already fighting to enact change.

There are plenty of resources out there too – including a glut of organisations brimming with reports, statistics, and further advice on how to get involved. These include Fashion Revolution (who encourage people to ask brands about the origins of their clothes on the anniversary of Rana Plaza every April), the Clean Clothes Campaign, Labour Behind the Label, War on Want, TRAID, the Environmental Justice Foundation, and research bodies such as the Centre for Sustainable Fashion.

Whichever route one chooses, today is definitely a good day to dwell on both past foundations and our present day situation. And for those of us who adore all the things that clothes can do and be – whether joyful, expressive, comforting, or practical – it’s time to start thinking about how the future of fashion should be one that helps women, rather than continuing to harm them.

Meet The Scents That Transport Your Senses