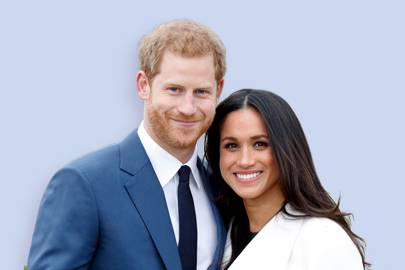 Meghan, who was a week overdue, gave birth at 05.26am on Monday morning with Prince Harry by her side and their baby weighs 7lbs 3oz.

Shortly after the announcement, Prince Harry stepped out at Windsor Castle to give an impromptu and heartfelt statement about the birth of his first child.

Clearly over the moon, Prince Harry said: “Mother and baby are doing incredibly well. It’s been the most amazing experience I could of ever possibly ever imagined. How any woman does what they do is beyond comprehension! We are both absolutely thrilled and so grateful for all the love and support from everyone out there. It’s been amazing so we just wanted to share this with everybody.”

After tracking Meghan’s pregnancy avidly, we’re so excited for the couple and believe the new arrival will bring some much-needed diversity to the monarchy.

The couple have kept details of their pregnancy fairly under wraps, with Harry and Meghan’s household recently saying in a statement: “The Duke and Duchess of Sussex are very grateful for the goodwill they have received from people throughout the United Kingdom and around the world as they prepare to welcome their baby.

Meghan Markle and Prince Harry’s baby finally brings diversity to our monarchy – and about time, too

“Their royal highnesses have taken a personal decision to keep the plans around the arrival of their baby private.

“The Duke and Duchess look forward to sharing the exciting news with everyone once they have had an opportunity to celebrate privately as a new family.”

Meghan had a surprise baby shower back in New York earlier this year and the five-day trip included a spot of shopping, eating her favourite foods, and a baby shower with 15 of her closest friends. The surprise trip was organised by her best friend and stylist, Jessica Mulroney.

While we didn’t get any major updates from the couple, their friends and family provided snippets of information, including Serena Williams who gave us an insight into how Meghan was coping with her pregnancy.

Speaking to People at the launch for her Serena clothing line launch in Miami, she said: “I’m like, ‘How are you?’ and she’s like, ‘No, how are?’ and I’m like, ‘You’re so sweet, but I’m really asking – how are YOU?’.

“I’m like, ‘Meghan, stop being so nice… you’re the pregnant one, aren’t you supposed to have hormones, why are you so sweet?’ But that’s always been her.”

According to the Daily Mail, Meghan and Harry’s baby is going to have some pretty damn famous godparents in the form of George and Amal Clooney. Casual.

A source told the paper: “Amal and Meghan have been close for years, and Harry and George have become buddies because of that. They’re much closer than the headlines let on.”

Apparently, George “told a couple of people he has a strong hunch” that they’ll be asked to be godparents.

We’re really hoping his ‘hunch’ is accurate and only time will tell.

We’ll keep you updated with all the updates as and when we know.

Welcome to the world, little one!

I Searched For Ways To Commit Suicide Online But The Internet...

What Happens When You Come Off Anti-Anxiety Medication