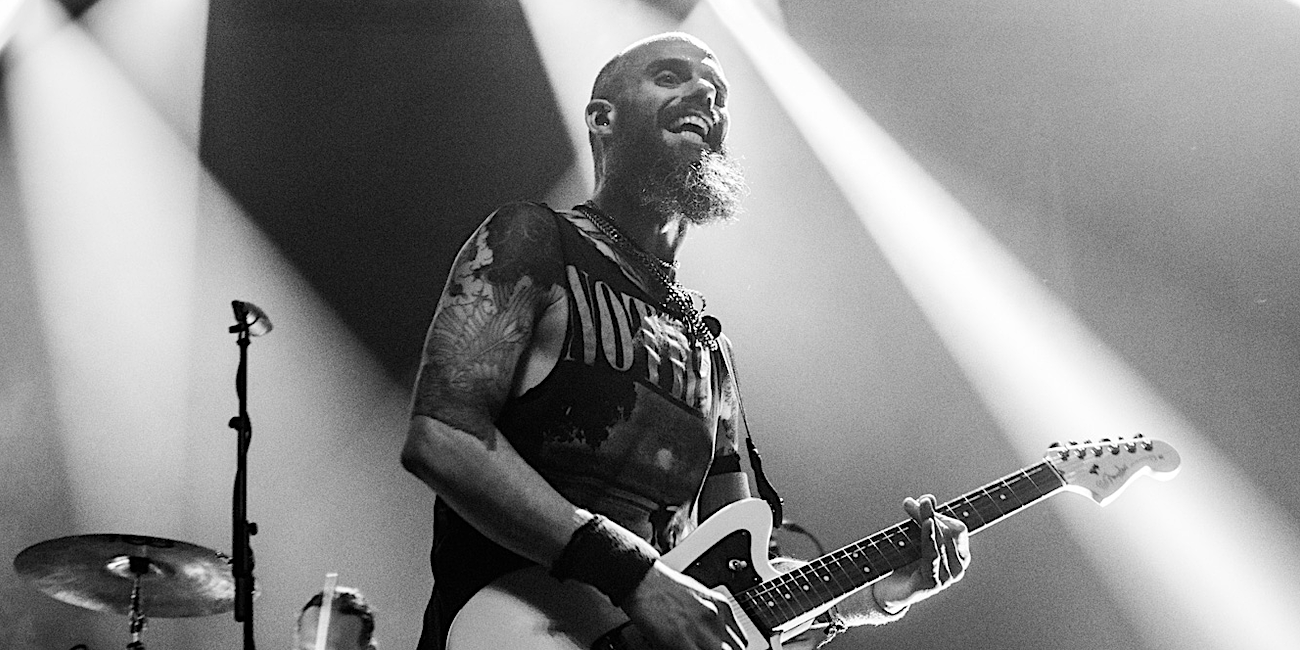 Twelve years since the band’s debut LP, Baroness are closing out their run of chromatic-themed albums with their fifth full-length effort, Gold & Grey.

Throughout their career, Baroness have continued to be a unique band in the world of rock and metal. From their eclectic range of sounds to their mesmerizing artwork, each of their releases represents a plethora of intriguing concepts and emotions. For the band, Gold & Grey is a monumental achievement that represents their drive and dedication to push themselves.

Baroness recently wrapped up a tour with Deafheaven and Zeal & Ardor, while also headlining the Decibel Metal & Beer Fest. In support of the new album, Baroness will continue to be on the road with more dates in the US this summer, along with a European tour with Volbeat in the fall.

We had the chance to talk with frontman John Baizley and ask him about Gold & Grey, the origin of the color-themed titles, the creative process of the band, and more.

On the origin of the Baroness’ chromatic themed albums

[The chromatic themed albums] were only ever meant to be a finite concept. [The theme] is sort of based on the traditional artist color wheel, which essentially has six colors in it; they are the three primaries, red, yellow, and blue, and the three secondary colors, which are green, orange, and purple. We [decided] to do the chromatic themed titles in 2007 when we just signed to Relapse Records. [The idea behind using colors as titles] was only ever a joke and was meant to conclude after we had done something with those six colors.

When we started off, we were playing music in, for lack of a better term, in the world of heavy music … we were all heavily invested in the DIY scene and punk music, and the look there was really dark, and it still is and always will be. Initially the idea was, among other things, that we might provide some kind of alternative aesthetic to [a genre primarily represented in] black and white, and occasionally red. So it was kind of like we could stick out, be a turd in the punch bowl so to speak, just by being colorful; it seemed so out of fashion at the time to do that. … We thought it would be funny and kind of fun to sort of mess with that idea of being a heavy band that plays loud and intense music, but also be very colorful.

I’m super psyched to get [all] the records in our hands because I think it’s going to be an awesome moment for me to line up all our vinyl and all the album covers, one after the other, and see the conclusion of that joke.

[The creation of our albums] is a process in which every element informs every other element. Having said that, we’ve really never repeated our process, even closely, from album to album; [our albums have] all been done in such wildly different ways. It’s really surprising to me and I don’t really know how these things happen, they just sort of do. The further away I get from recording the record the more mysterious that whole process becomes. It has been kind of awesome [given this process], especially with this most recent record Gold & Grey; it has been such a wild ride, I don’t think any of us really know how we did it.

When we were making [the album], we were not conscious of the fact that it was the last album with a color for a title; honestly, we were just writing another record and trying to write the best record that we can. We [wanted to] really impress ourselves with regards to our last record. … It would be absolutely presumptuous of me to think that I could do everything that we do alone, I can’t. The more of a leadership position I’m in, the more I depend and rely on the trust and musical relationship that I have with the rest of the band, all who are contributors and songwriters. I think what’s been really intense and amazing over the past half-decade is that as this band’s become a more serious thing for all of us … the bond that we have has become more unified, focused, and driven.

In the case of [Gold & Grey], I think that every discussion that we had that was heated and emotional was about which of two or three ideas was the better of three already good ideas. As the band’s grown, the cooperation has also grown; it hasn’t become more divisive in the case of everybody trying to have their say or scream over the top of one another in a way that’s not productive. In fact, we might scream louder at one another, but it’s very much a case of being excited; [it’s that we are] trying to inspire and drive one another to become better and do more interesting and unique things with our music. [Gold & Grey] is a very unique writing, recording, and now performing experience; we pushed very hard, we dug our heels in so deeply on this record.

On what he strives to share through his art

[I] try to express real exposed, difficult, dramatic, melancholic, uplifting kinds of emotions. I would say we are, if nothing else, an emotional band. There’s a weird process I have to maintain to do all of this effectively. As a result, or as something I’ve always done, I try to tie in things that, as personal as everything gets for me, that are relatable. I focus a lot on symbolism, I use a lot of metaphor and visually I’m into iconography; [I like to] explain and use archetypes, and subvert images and ideas that I think we’re all familiar with. I want to use [all these elements] in a way that helps me tell those personal stories, and in such a way that we can all understand them in a way.

I think the experience of listening, performing, and writing music is a very personal one. I want to make sure that, if there are fans of ours who are fans at the level that I am with other bands, I want to make sure that their experience is as close to the best experience I’ve had as possible. In order to do that, it’s kind of a simple tactic: tell the truth, be genuine, dig deep, tell a story that’s yours, and don’t hold back whenever possible. In [approaching the material this way], I’m not writing for the audience, I’m writing for me. If I’m excited, if I’m psyched, if I feel it, that’s the only way [the art] is going to extend to the audience. People have told me in the past there’s something they connect with [in our music] and I try to respect that; but at a very fundamental basic level, I have to respect what I’m doing. I have to feel like I’m experiencing growth through our music and doing something that is important to me.

I, and we as a collective, did not compromise on our vision. I can’t say that we always knew exactly what we were doing, I can’t say that anybody was ever chasing the same exact thing, but we had a single-mindedness about us; that required, at least on my part, that I not stop until the [album] was done. At this point in my career, I cannot afford to skimp on vision; I can’t afford to skimp on energy. Everything that I do has to be, at the time that I am finished with it, the best thing I was capable of doing; if not more than I thought I was capable of doing, and I can say that about this record. Whatever my loose concept of [the album] was before we started writing or recording it, it was surprisingly different [as we continued]; that is something I really have always chased with records. At the end of the day, that is most definitely how I [define] success on my terms.

I look back on all our old records: Red, Blue, Yellow & Green, Purple, and everything was different about them. But the continuum that flows through those records outweighs those changing variables [throughout each record]. For me, the experience has always been an uplifting and positive one; [an experience] of taking something in life that is dark and turning it into light, taking the negatives and turning them into positives. That’s how I remember our former records and most definitely how I would prefer to remember this one. But we’ll see, who knows.

Our thanks to John Baizley for taking the time to speak with us. Baroness’ new album, Gold & Grey, is out June 14th, and available for purchase at this location.