From the second that Prince Harry and Meghan Markle went public with their love story in 2016, there hasn’t been a single facet of royal life that the American hasn’t modernized in some way or another.

From her proudly progressive politics to her groundbreaking wedding ceremony, her approach to raising a royal baby to her routine flouting of outdated royal protocol and convention—hell, even just her mere existence as Duchess of Sussex while being a multi-racial foreign divorcee—Meghan has proven that she’s a thoroughly modern woman ready and willing to revolutionize royal life at any cost.

But it’s not just her progressive ideals that she’s bringing to the table. With a past life as an actress, starring on the USA drama Suits when she met Harry, not so far in her past, she also brings a singular taste level to the party, gleaned from her days spent on red carpets and industry functions, draped in designer goods.

The first indication we got that Meghan’s tastes lie somewhere beyond the royal family’s traditionally staid approach came courtesy of her wardrobe. Not only have her impeccably chic choices led to a phenomenon that’s been referred to as the “Markle Sparkle,” where the days after the Duchess wears a piece by a particular fashion designer, said designer or brand will see typically a 200 percent in search demand over the week, but they’ve also proven that she’s not afraid to take risks (a la the stunning semi-sheer Ralph & Russo couture gown she wore in her and Harry’s engagement photos) and pay a pretty penny to do so.

Take her outright enviable maternity wardrobe while she was pregnant with little Archie Harrison, for example. According to research by Love the Sales, the total cost of each and every one of Meghan’s ensembles during those months before she went on maternity leave came in at nearly $700,000 dollars, with a bespoke Oscar de la Renta gown worn to the Australian Geographic Society Awards gala last October standing out as the priciest piece in her coterie. Per the Daily Mail, the dress, covered in black birds, retails for over $12,000. 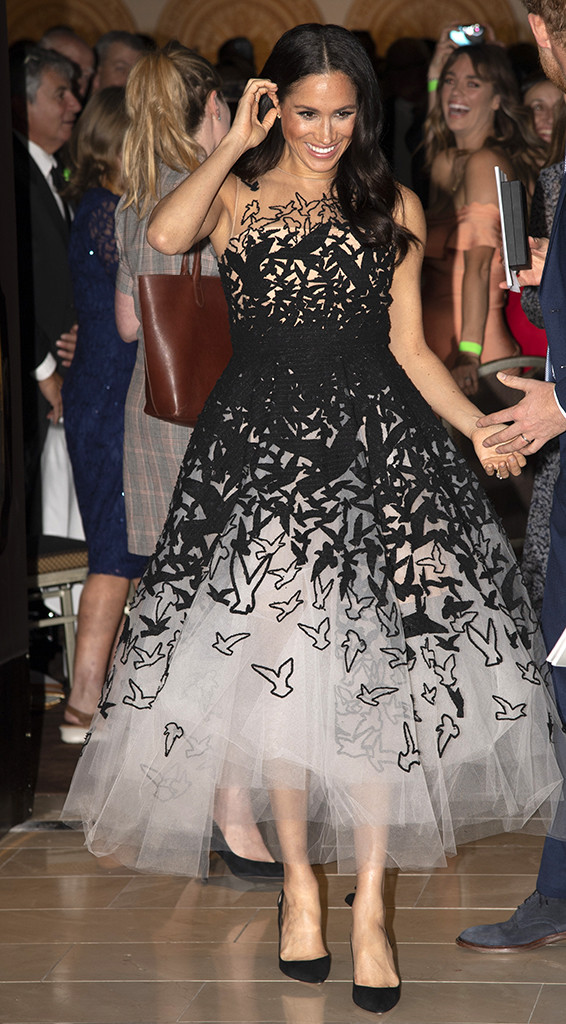 As Love the Sales noted, Meghan’s wardrobe was many times more expensive than that of her new sister-in-law, Kate Middleton—seven times more, in fact. Meghan has a well established background before [marrying] Harry as a woman who enjoyed designer clothing,” Love the Sales’ fashion editor Liam Solomon told MarieClaire.com in March. “From walking red carpets to living a glamorous LA lifestyle, the former actress was already wearing brands like Dior and Givenchy. You could argue that her new found fame in the Royal family has only enhanced her style choices, which would obviously mean bigger budgets.”

“Quite the opposite environment Kate has grown up in, has meant she has stuck with more understated brands,” he continued. “As Meghan was wearing Stella McCartney & Victoria Beckham during her pregnancy, Kate favored pregnancy brands like Seraphine, which were much more affordable.”

While pregnant, Meghan’s exquisite tastes—and her willingness to spend whatever needed to satisfy them—weren’t only on display in her wardrobe, however. In the days and weeks before Archie’s birth, we learned that Meghan had hopped back across the pond in February for a glamorous A-list bridal shower in the Big Apple, planned by bestie Serena Williams, which she traveled to on a chartered private jet that reportedly cost $125,000 round trip. And then, in early April, there was the luxe babymoon with Prince Harry at the five-star Heckfield Place in the Hampshire countryside (just 45 minutes away from home) that cost reportedly $43,000.

Of course, that all paled in comparison to the project underway at their intended residence, Frogmore Cottage. While we knew that the Sussexes were planning to chart their own course at the Windsor home handed over to them by Queen Elizabeth II as a gift. It took four months—from November 2018 through to the following March—to get the home up to par for the Duke and Duchess to begin life there as new parents, as well as a whole lot of taxpayer funds, as we learned this past week.

According to The Sovereign Grant and Sovereign Grant Reserve’s just-released annual report, upgrades to Frogmore Cottage cost £2.4 million (over $3 million) in taxpayer money. “The property had not been the subject of work for some years and had already been earmarked for renovation in line with our responsibility to maintain the condition of the occupied royal palaces estate,” Sir Michael Stevens, who is the Keeper of the Privy Purse and responsible for the monarchy’s accounts, said. “The Sovereign Grant covered the work undertaken to turn the building into the official residence and home of the Duke and Duchess of Sussex and their new family. The building was returned to a single residence and outdated infrastructure was replaced to guarantee the long-term future of the property.”

Of course, the work done on the historical home wasn’t done simply because of Meghan and Prince Harry’s particular sensibilities. It was also a matter of necessity. Per the report, the funds were used to reconfigure and fully refurbish five residential units in “poor condition”—turning them into one official home. A royal source said the work included replacing defective wooden ceiling beams and floor joists, updating outdated and inefficient heating systems, doing electrical rewiring and installing new gas and water mains.

It should be noted that the Duke and Duchess also helped to foot some of the costly bill. “Substantially all fixtures and fittings were paid for by Their Royal Highnesses,” Stevens said, with a source clarifying to People, “Curtains, furnishings—all that would be paid separately, paid privately.” According to a royal source, an allowance is provided to help fund a new kitchen, bathroom and other features; however, if a higher quality is desired, the extra amount must be paid privately. These totals and details were not provided in the official report, however.

And while it appears that Meghan and Harry may not be finished updating their home just yet—in May, it was revealed that applications to update nearly all of Frogmore Cottage’s exterior had recently been approved—it should also be noted that they’re hardly the only royal couple to have incurred such expenses. And when compared case of Harry’s older brother, Prince William, and his wife Kate, they seem downright frugal. As it was revealed in 2014, when the Duke and Duchess of Cambridge were renovating their current home at Kensington Palace, they tapped into more than $5 million in taxpayer funds as they transformed offices into an apartment for themselves, with work including electrical services, new heating, hot and cold water, the removal of asbestos and a “simple redecoration,” according to People. They, too, used their own funds for a new kitchen and furnishings.

In recent days, we also learned that Meghan had her engagement ring, designed for her especially by Prince Harry himself and featuring two diamonds from his late mother Princess Diana’s collection, updated as an anniversary gift from her husband. Only noticed when fans compared close-up photos of the Duchess’ hand, it became clear that the original band of gold that the three diamonds had been set on had been replaced with a thinner micro-pavé band, featuring a line of smaller diamonds inset deep on the band.

Naturally, it was a decision that didn’t sit well with at least one so-called “royal expert,” as Majesty Magazine editor-in-chief Ingrid Seward, who’s been covering the royal family since the ’80s and has written over 20 books on the subject, told The Sun this week that she couldn’t comprehend the thought-process behind updating the piece of jewelry.

“I find it a bit odd Meghan would want to alter a ring that her husband had especially designed for her,” she said. “A royal engagement ring is a piece of history not a bit of jewelry to be updated when it looks old fashioned.”

But what historians like Seward don’t seem to comprehend at this point is that they’re the ones who seem a “bit odd” when it comes to their reactions to the Duchess of Sussex. Because at this point, if they don’t realize that she’s determined to update all facets of a rather old-fashioned royal life, while still remaining reverent to the history behind it all—well, that’s on them.

The Mother Of XXXTentacion’s Child Just Won Legal Battle Over His...

So Sad: The Braxton Family Suffers A Tragic Loss Days Before...