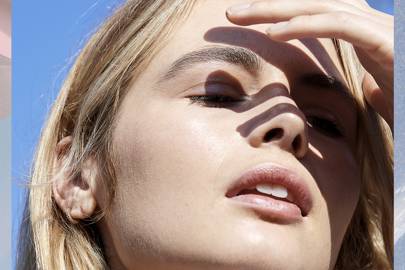 Except for the occasional breakout, the odd ‘monster spot’ induced by a frenzy of chocolate or a dodgy foundation, I lived the best part of 24 years blissfully spot-free. At 16, I started taking the combined contraceptive pill to ward off a bout of typical teenage acne and it worked. But when I decided to give up artificial hormones for good years later, I had a feeling my luck was about to run out.

For three uncertain months post-pill, things stayed remarkably clear in the skin stakes. Then, they arrived. Spots – unlike I’d ever seen them before. Deep cystic pimples that lingered for days, open pores that were gone almost as soon as they appeared, blackheads, whiteheads, everything. Nobody mentioned it but anyone who’s had any kind of visible blemish will recognise the feeling of realising, mid conversation, that the person you’re talking to is gazing not intently into your eyes, but directly at your breakouts.

I felt embarrassed and reliant on makeup, as you’d imagine, but also an unexpected sense of failure. I worked in beauty at the time and professed to know the skincare solution to everything. It felt hypocritical, even negligent, not knowing how to solve the puzzle my own skin was presenting me with. I tried to stay philosophical – it’s just your face, I thought, and nobody notices as acutely and critically as you – yet I longed to peel off my skin’s topmost layers and restore the clear visage I’d taken for granted for so long.

After a month, I sought medical help in the form of a kind GP who told me it was moderate-to-severe acne, prescribing antibiotics called oxytetracycline and a benzoyl peroxide (eek) cream called Duac. A cursory Google of the cream on the way home revealed wildly varying results, from overnight cure to pointless potion. For me, sadly, it was the latter. The antibiotics, too, did nothing but cause a little bloating.

So what was actually going on? Dermatologist Dr Dennis Gross (whose ingenious products I eventually discovered, more on which below) is well-placed to explain. “Skin hates hormonal fluctuations”, he says, “and when you abruptly stop taking artificial hormones, the oil glands in your skin switch to making oil that is heavier, which then gets stuck in the pores and blocks them. This causes blackheads, behind which bacteria grows, leading to more severe pimples.”

This is the bacne clearing cream Amazon reviewers are raving about

Though unaware of this wisdom, I did decide to go back to something that had been waiting patiently on the bathroom shelf all along – skin care. Say what you will about skin care (the false promises, the hefty price tags, that one friend who has perfect skin yet uses ‘just soap, sometimes’) but the following products have changed my face and – not to be more dramatic than necessary – my life. I still get spots, don’t get me wrong, but their frequency and severity have seriously reduced.

I use Dermalogica Clearing Skin Wash, or (when budget allows) Daily Microfoliant for an undeniably bougie but downright brilliant first cleanse. Initially, I used the Microfoliant – a curious powder cleanser – wrong and missed the full effects. Make sure you’re pouring it into really wet hands and creating a frothy-textured cleanser before rubbing it in circular motions on your face for at least a minute, that way, you know that the ingredients (best of all salicylic acid, which exfoliates deep within pores) have been released.

Salicylic acid is the only skincare ingredient you need to know about if you have spots. Here’s why…

Double cleansing seems a bit extra but I’ve found that it really makes a difference, not to mention getting all your make up off. My weapon of choice is Dr Dennis Gross’ Alpha Beta Pore Perfecting Cleansing Gel. It’s a satisfyingly thick gel with alpha and beta hydroxy acids to work on that heavy, pore-clogging oil that can come post-hormones.

What is double cleansing and should you be doing it?

I worked up to Dr. Gross’ Alpha Beta Universal Daily Peel by using REN’s Ready Steady Glow Daily AHA Tonic daily for a month, which contains lactic acid to gently resurface skin. It helps to slow breakouts down and gives a great glow but, if you need something more heavy-hitting (as I did) move up to Gross. His ‘Peel’ comes in the form of two pre-soaked pads, which essentially speed up your skin’s normal shedding process (sounds scary, is wonderful) exfoliating pore-blocking dead skin cells away.

Everyone should be using an acid for the best skin of their life, here’s how to find the right one for you

Moisture can feel like the enemy – but don’t make the same mistake I did and try to dry everything out. I’m aware that I sound like a broken record, but Dr Gross’ Alpha Beta Exfoliating Moisturizer is the only cream I put on my face these days. It contains that same blend of exfoliating, pore-minimising, spot-banishing acids combined with sodium hyaluronate (the salt form of hyaluronic acid) to give your skin the moisture it needs without causing more breakouts.

How I stopped popping my pimples for a month

In the world of acne advice, ‘don’t pick’ is simultaneously the most obvious and the most irritating. The one thing that helped me to resist is simple: don’t look too closely. I find that when I stop analysing my face and systematically mapping out every blemish, things improve. If you have squeezed, don’t feel bad – reach for an oil-based treatment like DISCIPLE’s What Spot? (Again, I know, oil on oil feels counterintuitive, but it worked for me). The antibacterial, anti-inflammatory oil helps to speed up the recovery process and is great pre-concealer if things have dried up in the blemish area.

One crucial thing to note is that everyone’s skin is different so there’s no such thing as a one-size-fits-all miracle cure. Another irritating caveat: these products ain’t cheap. I bought and trialled all of them myself, cutting other spending as an investment in a clearer skinned future. If you have the confidence not to bother, I salute and envy you. But if you don’t, these products could help you out, too.

What Is Yarrow And How Can It Transform Your Skin?

There’s a really easy way to get huge discounts on every...