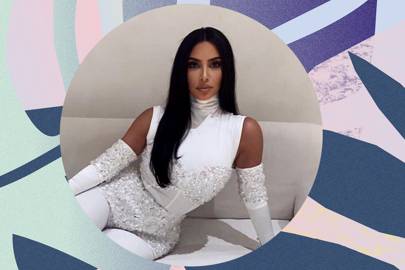 Kim and Kanye welcomed son Psalm ‘Ye’ West into the world on the 2nd May 2019, and one month later they have just shared his first-ever solo shot. The reality star and kickass businesswoman shared the adorable image of her newborn son with her 141 million Instagram followers with the caption ‘Psalm Ye’.

The tot can be seen sleeping with his hands behind his head dressed in an all-white onesie.

According to Psalm’s birth certificate, he was born at Cedars Sinai Medical Center in Los Angeles where all Kim’s children were born, as well as Kris Jenner’s six children. He was born via surrogate after Kim suffered from life-threatening placenta accreta during her first two pregnancies.

Psalm is the fourth addition to the Kardashian West brood. He joins siblings North, five, Saint, three, and Chicago, one.

One week later, she shared a screenshot of a text message from husband Kanye with the words ‘Beautiful Mother’s Day, With the arrival of our fourth child, We are blessed beyond measure, We have everything we need’ alongside a sweet photo of Psalm asleep in a cot.

The Mayr Program Is The Wellness Trend All The Celebrities Swear...