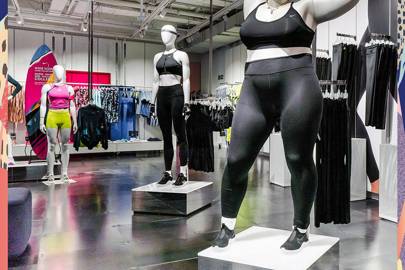 In a world of Facetune and Photoshop overload, any honest, unretouched depiction of beauty, fashion and women’s bodies deserves to be applauded. That’s why we – and most of the nation – are seriously impressed with Nike’s new Women’s floor at its NikeTown London flagship store.

Quite rightfully celebrating diversity and inclusivity in sport, the space shows Nike plus size and para-sport mannequins for the first time.

However, not everyone lauded Nike like we did, with some taking to social media to suggest the mannequins were promoting ‘unhealthy’ weight levels.

Here, Megan Crabbe, Body Positivity Campaigner & best-selling author @bodyposipanda, hits back at the trolls in this open letter for GLAMOUR, sharing why she believes every single shopper is worthy of being catered for, being celebrated, and being treated with respect, regardless of their fitness levels, despite how furiously the fatphobes scream and shout.

I thought I’d go and visit the babe responsible for thousands of fatphobes on the internet losing their shit this week. Apparently a fitness brand using mannequins above a UK size 8 is the most outrageously offensive thing that’s ever happened! Or to quote some of the comments I’ve seen – “dangerous”, “disgusting”, and “promoting death”. Imagine my surprise when I entered @nikelondon and the mannequin did not, in fact, try to kill me! We actually got along great and fully rocked this impromptu photoshoot. • And do you know what I noticed during my death defying encounter with a plus size piece of plastic? People of all shapes and sizes were in the store. Some bigger than the mannequin, some smaller, and every single one deserves to see themselves represented and be catered for. Regardless of their fitness level. Whether they work out or not. Whatever fatphobic wankers want to say about who can and cannot wear a pair of fucking leggings. Every one of us is worthy of being represented, celebrated, and seen. This is a very small step in the right direction, and the reaction to it has shown exactly how necessary it is. • P.s. the mannequin is called Avril and she would like to remind you to drink some water and say something nice to yourself today. ????????????????☀️ • [image description: Megan is standing in a Nike store next to a plus size mannequin in black sportswear. She’s wearing a white crop top, pastel patterned trousers and pink trainers while smiling and leaning on the mannequin as if they’re besties] #bodypositivity #bodypositive #bodyconfidence #justdoit #nike #allbodiesaregoodbodies #fitnessmodel #plusisequal #bodyposi

Welcome, guys, gals and non-binary pals! It’s the year 2019, and this week on the internet, a plus-size piece of plastic became one of the most talked about people in the world.

Nike unveiling its new larger-bodied mannequins has shown us once again that hell hath no fury like Twitter users forced to acknowledge that humans of all shapes and sizes exist. And maybe even – gasp – move their bodies!

As the first image of the flagship store’s latest resident started circulating last week, so too came the flurry of angry comments – “this is disgusting”, “what a dangerous message”, (and my personal favourite) “how can a sportswear brand be promoting death like this”. I never realised that death was in the same promotional category as sports bras, I wonder whether it comes in a racerback version…

Of course, the reasoning behind the rage is the same reasoning that gets pulled out of the bag whenever a fat person dares to be visible in any way: health. The argument goes that by acknowledging the existence of people over a UK size 12, we must be promoting unhealthy lifestyle choices and encouraging the world to gain weight.

Fatness seems to be the only physical attribute that someone can unknowingly promote simply by existing as a fat person. I’m yet to see a blonde person being accused of promoting pale hair, or someone who wears wide-fit shoes be harassed for glorifying broad footedness.

The fact that physical health is determined by so many more factors than size – stress levels, sleep patterns, genetics to name a few – is irrelevant to the people of Twitter. Show them a picture of a plus size woman simply living her life and internet doctors magically appear from every corner, ready to do what they believe will make people much healthier: shame, berate and belittle them until they feel utterly worthless. Who cares about mental health, right?

As any person in a larger body will know, the classic go-to insults for fatness often revolve around laziness and not going to the gym enough. So you’d think that when a major sportswear retailer decides to cater to a wider range of bodies so that more people can comfortably enjoy movement, it would be met with applause! Apparently not…

Health is just a convenient and socially accepted guise for fatphobia, and fatphobia is everywhere. It’s in the angry comment threads, it’s in the on-screen fat suits and jokes about bigger characters, it’s in the doctors office when larger patients are prescribed weight loss after going in with an ear ache, it’s in the insults hollered on the beach, it’s in the high street stores stopping their clothing at an 18, it’s in the public transport that’s inaccessible because of seat restrictions. It’s everywhere. And it’s on all of us, especially those of us with the privilege to have never – or less often – experienced the above, to recognise and stand against.

And for the record – turning health into a moral imperative whereby human value is ranked by which bodies are the fittest is ableist as heck. A person’s health, mental or physical, will never be a justification for treating them as if they’re worthless. This isn’t The Hunger Games, hun.

Earlier this week, I decided to go and visit the mannequin responsible for infuriating the thousands. While I was in the store I saw shoppers of all shapes and sizes, some bigger than the mannequin, some smaller.

Every single one of the people there were worthy of being catered for, being celebrated, and being treated with respect. Regardless of their fitness levels. Whatever their reason for wanting those new leggings. No matter how furiously the fatphobes scream and shout. All bodies are deserving of respect, point blank, end of story. Diversifying which sizes we see being represented is a very small step in the right direction, but we’ve got a hell of a long way to go.