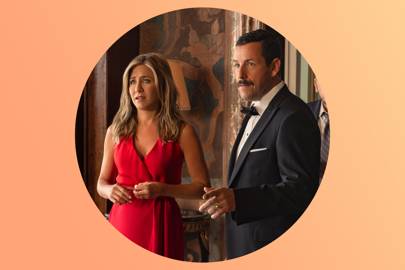 When Birdbox first came out, it was the topic of conversation (and memes) for weeks. In case you missed the boat, the film followed Oscar-winning actress Sandra Bullock and her dangerous journey to sanctuary after a mysterious force decimates the population. Only one thing is certain with this force too… if you see it you die.

At the time, it seemed anyone with a Netflix account was watching the chilling and agonisingly gripping film. This sentiment was true, Birdbox held the record for the most watched film on Netflix until Netflix’s new action-comedy, Murder Mystery, appeared on the scene. In just three short days, 30 million people had watched it. Wowza.

Murder Mystery is a new film about a married couple who go on a much-needed vacation to Europe when a chance encounter leads to them being framed for an elderly billionaire’s death. You can only imagine how hilarious this film is with comedy duo Jennifer Aniston and Adam Sandler playing the lead roles.

While it comes as no suprise that Murder Mystery has taken the crown for the biggest opening weekend ever for a Netflix film, we’re surprised to see two very different films competing against each other. Aside from their A-list cast, Murder Mystery is a rather radical departure from Birdbox. It’s the perfect light-hearted hungover Sunday viewing, while Birdbox is a post-apocalyptic thriller that’ll have you hiding under the duvet. Either way, the enormous success of Murder Mystery and Birdbox once again proves that Netflix are at the top of their game.

Consider your weekend viewing sorted… if you aren’t one of the 30 million people that have already watched it!

Cardi B and Offset Relationships News and Updates

Sophie Turner And Joe Jonas’ France Wedding: All The Details