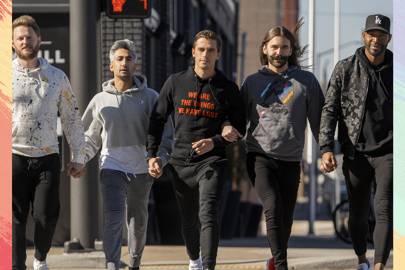 Did you race through season three of Queer Eye and then panic it was all over too quickly? Well, fear not because it’s only gone and been renewed for a fourth season *screams*. And the best part? We only have a month to wait!

Antoni, Tan, Karamo, Bobby and Jonathan will relocate from Kansas City to Philadelphia for another eight episode of show-stopping makeovers and emotional lifestyle overhauls that are guaranteed to have the waterworks rolling.

The news was confirmed on Queer Eye’s official Instagram page with a promo video of the Fab Five captioned: “Have you missed us? (We missed you too) We’re back in Kansas City for Season 4, July 19”.

The Fab Five’s resident stylist, Tan France, also shared the news on his Instagram page with a throwback snap of the boys. “WE’RE BACK!! Season 4 drops July 19th. Rewatch seasons 1-3 to get you amped for what is going to be the very best yet! @queereye @netflix P.S I didn’t have a cute BTS pic from this season, so here’s a throwback to season1”

If we’re not already spoiling you with the good news, a fifth season set to premiere in 2020 has been confirmed, and the Fab Five have also filmed four episodes in Japan. Talking to Digital Spy, Bobby Berk said “the first episode you guys see might be my favourite episode we’ve ever done,” he said. “Two best friends of decades hugged each other for the first time, because we hugged. They started crying and going, ‘Why haven’t we hugged each other our whole lives?”.

Tess Ward On Modern Feminism And The Nature of Victimhood