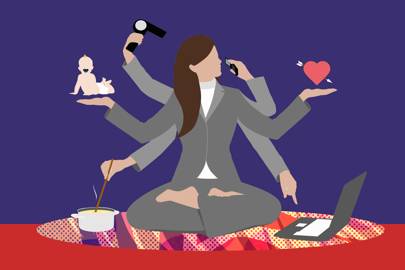 Absolutely sick of being asked when you’re going to settle down and start a family? Sometimes feel like we’re still stuck in the 1950s? It has recently been reported that women without a spouse or kids are actually happier than anybody else. There’s a fact for the next time some random uncle decides to delve into your relationship status at a family wedding.

Paul Dolan, professor of behavioural science at the London School of Economics, conducted the research in question and has announced that “The healthiest and happiest population subgroup are women who never married or had children.”

Author of the bestselling book, Happiness by Design, Paul studies measurements of happiness using his own unique methods. Paul’s findings also show that while “married people are happier than other population subgroups,” this only relates to “when their spouse is in the room when they’re asked how happy they are.” He then continues, when a woman’s spouse isn’t there, they’re “f-ing miserable”.

Interestingly, he has concluded that men “calm down” during marriage, as “you take less risks, you earn more money at work, and you live a little longer.” Paul then finishes by saying “she on the other hand, has to put up with that, and she dies sooner than if she never married”. Now call us old-fashioned, but isn’t that hugely sexist? Not to mention a massive generalisation.

In this scarily Trump-esque era, GLAMOUR asks why not one of the wannabe Tory PMs has come out in support of women’s reproductive rights

But, one thing that does resonate, is an excerpt from Paul’s book as referred to on his website, pauldolan.co.uk. It reads: ‘Being happier means allocating attention more efficiently; towards those things that bring us pleasure and purpose and away from those that generate pain and pointlessness.’

Which I think is a key point covering the pressure women are often faced with to marry or have a family. It is pointless to pursue a relationship which doesn’t serve you, affects your personal achievements or causes misery.
Rochelle White, founder and director of Rochelle White PR is 33, child-free and single.

Rochelle explains her take: “I feel that I am in a very good position. I am around many friends who are married and have children and there is nothing wrong with that. I get asked and so do my parents (bless them) when am I going to settle down or have children. My answer is always – if it’s meant to be it will be and it will happen when the time is right. I have never really been one for making a plan to settle down- of course I want to one day but right now I am so happy. I can enjoy holidays and take them whenever I please.

“I still have options to go to festivals, nap and be a little bit selfish with my time and money. I don’t have to stress about someone’s else time or childcare. I 100% don’t take this for granted, but I really enjoy that I have that freedom. I think in society if you pass the age of 30 and are not settled down, there must be something wrong with you. I don’t think that is the case at all. It can be and usually is a choice. No one (including myself) wants to settle down for the sake of settling down. I have a while left to enjoy my time, freedom and money and I intend on doing it for a good few years yet.”

Rochelle concludes: “I still think that there are expectations on women to be settled by a certain age. It’s slowly changing but people do still judge and sometimes look down at people who aren’t. You would think in 2019 things could have changed or even evolved.”

If you ask us here at GLAMOUR HQ, the main thing is to do whatever you want with your own life and not respond to any societal expectations.
And Rochelle agrees, finishing by saying “Expectations have to change, with a greater focus on careers, female entrepreneurs and women doing more – but yet, being settled will always be something that is a pressure for women.”

Meet the designer putting militants and feminists on her jewellery