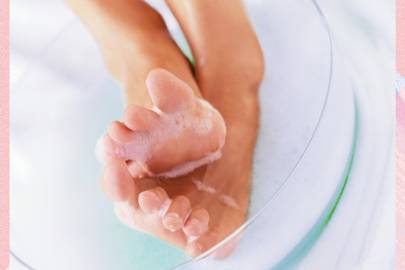 We hate to be the bearers of bad news, but it’s officially sandal season. The arrival of sandal season (or summer as it’s more commonly known), means it’s time to start paying more attention to the state of your feet. No longer can un-pedicured tootsies be hidden in closed-toe shoes and ignored.

But how do you go about reversing six-months worth of damage to get your feet baby-soft once more? Forget pumice stones and foot files, according to the internet, the secret to ditching dead skin could be sat in your bathroom cabinet.

A fan of Instagram cleaning star Mrs Hinch has taken to the We Love Mrs Hinch Facebook group to reveal her personal pedicure hack: Listerine. The woman shared a snap of her feet soaking in a washing-up bowl full of Listerine Cool Mint Mouthwash along with the caption: “House all scrubbed now time for a foot treat”. Despite the user claiming the results to be ‘amazing’ and to leave skin ‘like babies [sic]’, other members of the Facebook group were dubious.

“How do people come up with these things? Who thought, ‘I wonder what would happen if I soaked my feet in mouthwash?'” one user asked.

Another more intrigued user wrote: “Listerine how does that work then?” And she has a point. Just how is it possible for Listerine to treat stressed-out feet?

Other posts on the internet, such as this one from Medical News Today, claim that a Listerine soak has the ability to prevent infections and help exfoliate away dead skin.

But it seems the method itself comes with some drawbacks. The original post saw several users address the skin-dying properties of the mouthwash, with one writing: “Remember you did this and your feet went green?!” Another warned: “I tried this and my feet went bloody blue! Never again.”

So, while we’re not sure that a mouthwash soak is the most effective way to get summer-ready trotters, we don’t doubt that the minty scent might have the ability to give tired feet a bit of a pre-summer wake up call. But is that enough for us to want to give it a go? Probably not.

These foot masks are the ultimate secret to sandal-ready feet