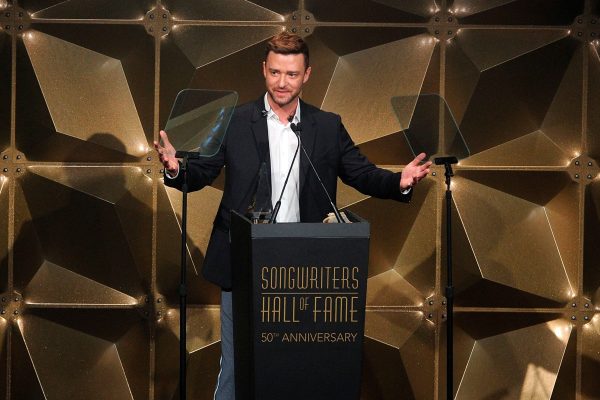 In addition to inducting a new class of long-praised, much deserving songwriters for its 50th anniversary induction ceremony including the likes of Missy Elliott, Yusuf (a.k.a. Cat Stevens), and more (as we reported here), the Songwriters Hall of Fame also honored contemporary songwriters who have been credited with making noted advancements in the field.

The latter – lauded for adding his penning to chart-topping hits in the late 90’s and early 2000’s to Pop group N*SYNC – also earned praise for crafting his own solo hits and writing for fellow Pop artists over his 20+ year career.  Presented the award by longtime collaborator Timbaland, the 38-year-old delivered a heartfelt acceptance speech before launching into a medley of some of his biggest hits including ‘SexyBack,’ ‘Cry Me a River,’ ‘Mirrors,’ and even famous ‘Saturday Night Live’ parody, ‘D*ck in a Box.’

Cardi B Blossoms For Harper’s Bazaar

Kevin Hart Apologizes For Anti-Gay Tweets: “I Love Everybody”