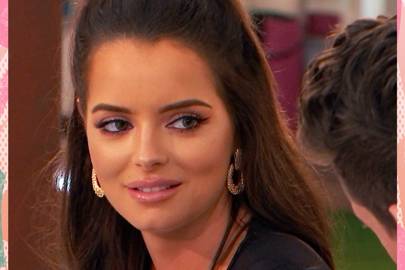 It’s safe to say that Maura is one of the most controversial Love Islanders of this series, with her OTT flirting tactics and uncompromising attitude.

Sparks in the villa have been flying left, right and centre. And that alone has made for both brilliant TV and plenty of drama.

There’s no doubt Maura divides opinion, but one thing we can get on board with here at GLAMOUR HQ, is her straight-talking sex chat and empowering stance.

Historically, women have been expected to be more reserved about sex and despite that remaining such a tired scenario in 2019, examples of slut-shaming prove that ridiculous gender double-standards do (sadly) still exist.

Bringing a decent dose of feminism to last night’s Love Island, the episode began with her giving devastated Lucie a pep talk. Offering support throughout their villa time and previously shunning the notion of us having to always be ‘girls’ girls’, she empowered her pal. With an arm wrapped around Lucie, Maura urged her to “show everyone, just how strong you can be”. My attention definitely piqued at this rallying kindness, radiating strength and confidence-building.

Then the next day, Tommy joined the girls for a bean bag chat, asking Maura, “On scale of 1-10, how much do you love sex?”, before she was completely open about her sex life. At one point, Molly-Mae told Maura she assumed the number of people she’d slept with would be higher, which assertive Maura immediately challenged.

With coupling on the horizon and the singles mingling, boys including Tommy gave new lad Tom love life advice. Approaching Maura shortly after, the conversation led to sex once again, when Tom told Maura, “you seem quite open about sex”. She quite rightly put him straight, replying: “why wouldn’t I be? Everyone does it”.

Maura continued by saying “women enjoy it just as much as men, so I don’t know why anyone gets so shocked when I talk about it”. And we immediately applauded her completely honest and empowered openness.

‘Please think about the implications of your words’: Love Island’s Amy Hart’s family release a powerful statement about the ‘vile’ trolling she’s received

There’s been massive controversy about Maura’s overt sexuality, with comments on social media hugely varied. Whether you love or loathe her though, by making it clear women and men are no different in their desire for sex, she is taking an important stand.

And as @itsamyleighx tweeted: “I personally am not a fan of Maura but her highlighting girls like sex too and normalising girls talking about sex openly is what we needed”.

‘Controlling behaviour is never acceptable’: Women’s Aid has issued a warning over Joe’s behaviour towards Lucie on Love Island

By being so confident about sex talk, and offering this valid viewpoint, it’s empowering for women watching, too. She’s brushing off the taboo about shying away from our sexuality, instead embracing her love for sex. Highlighting how normal this is, Maura is smashing that expectation of women to be shy and retiring about sex, or less willing to talk about it than men. Shaking up the series for lots of different reasons, last night’s dialogue was a refreshing watch.

And in 2019, on mainstream TV, this is a welcome conversation to be had.

Everything you need to know about Love Island’s new bombshell, Arabella Chi