Perform This Way: No one has ever really done things the way “Weird Al” Yankovic does them. Sure, parody songs weren’t new when he started doing them back in the ’80s, but the flair and genius with which the Weird One performs them is unmatched. So, at this point in his lengthy career, who’s to tell him what he can and can’t do? No one batted an eye when he decided to go on his “The Ridiculously Self-Indulgent Ill-Advised Vanity Tour” last year, eschewing his major hits for deep-cut originals. Similarly, there was no cockeyed stares when he announced his “Strings Attached Tour”, promising to bring a full orchestra on stage with him across the country. Comedy music elevated bassoons and oboes? Of course, that’s ridiculous, you might say — but it’s “Weird Al”. Ridiculous is what he does.

On a deleteriously sweltering evening in Queens, New York, Yankovic proved that even when he’s getting classy, he’s still weird. The Forest Hills Stadium show opened, as the whole tour has, with the orchestra (in this case, the Queens Symphony Orchestra) delivering a few classic film scores to warm up. Hearing John Williams’ “The Raiders March” from Indian Jones and “Theme from Superman” was honestly as high-brow as the evening really got. When Yankovic took the stage, it became clear that all the violins and trumpets were merely a new extension of his comedic approach, a parody of the sort of symphonic performances many rock acts have undertaken in recent years. 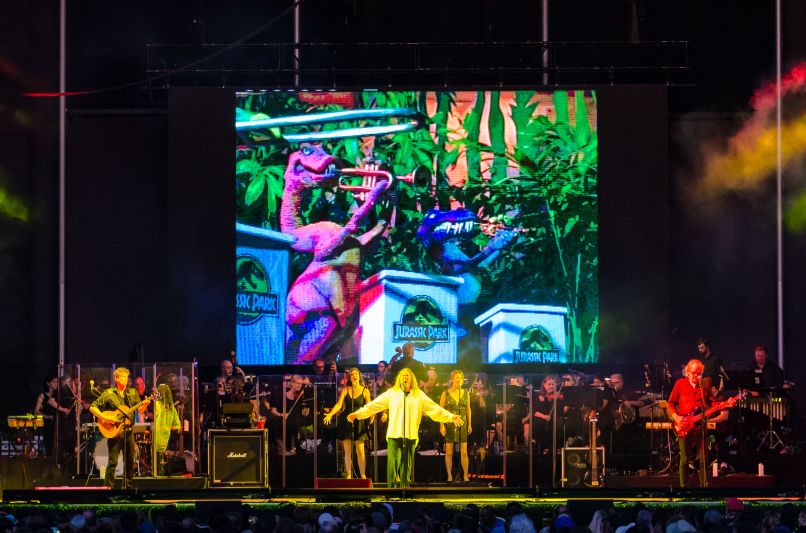 The Saga Begins: With the band playing the UHF theme, “Fun Zone”, Al took the stage with the reception of a true icon. Fans stopped waving their, well, fans for a minute to deliver uproarious applause at the sight of their curly-haired, flower-print-shirt-wearing hero. It would have been a fine opportunity to start big; instead, Yankovic played right into the irreverent nature of this whole ordeal. He sat on a stool ahead of his backup singers and, with the feigned earnestness of a balladeer, went into a melody of “I Lost on Jeopardy”, “I Love Rocky Road”, and “Like a Surgeon”. Amazingly, with that sweeping orchestra behind him, there was a real added level of sincerity to the songs, sold even more convincingly by Al’s delivery.

Though there was a scripted feel to the proceedings, it was to be expected. When you have to get a full symphony behind you, you can’t be changing the setlist every other night. Ever the showman, Al made the transitions work perfectly. He introduced the 45-second “Harvey the Wonder Hamster” as “one of the main reasons we’re doing this tour,” noting he’d never played it live before because he wanted to wait until they could “do it right … with a 41-piece orchestra.” Confetti blasted off at the end as he dipped into, of all things, “Weasel Stomping Day”. “Jurassic Park” felt like the most appropriate song for the setting, and it did indeed feel larger than anything else played during the set.

Dare to Be Stupid: On the other hand, the many strings and horns tended to fade away behind tracks like “Don’t Download this Song” and “Dare to Be Stupid”. Obviously Al carefully selected songs that would work with the added instrumentals, but frankly you’re not going to hear the tuba when guitars are shredding during “Smells Like Nirvana”. His lengthy storytelling originals offered perhaps a better opportunity to indulge, and it certainly worked on the fantastically stupid “The Biggest Ball of Twine in Minnesota”. Though, at the same time, it all seemed to drag a bit on “Jackson Park Express”. Personally, I would have preferred an attempt at “Albuquerque”, though I would never think to question the master himself. 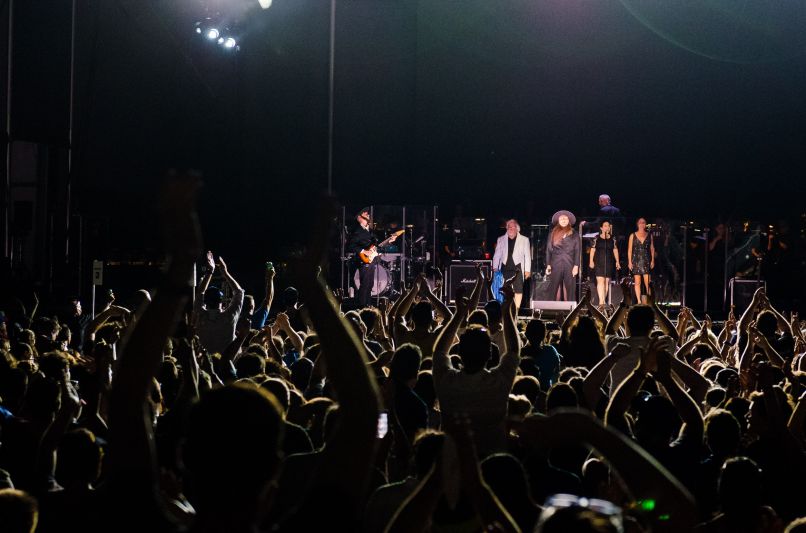 Eat It: Speaking of missing songs, some of “Weird Al”‘s biggest hits were absent — very much on purpose. He announced earlier in the summer that his iconic Michael Jackson parodies, namely “Eat It” and “Fat”, would be left off the setlist in light of the recent renewal in interest of the allegations against the pop star. Although the classic cuts were certainly missed, it’s not like this was Smash Mouth not playing “All Star”. Al’s catalog is worthy of three concerts like this, and you’d still feel like there was that one favorite you didn’t get to hear.

Fun Zone: So while The Food Album wasn’t entirely represented, there were plenty of highlights to be had. “One More Minute” may not be a smash of a song, but Al handing out a fork, sweaty scarves, and the underwear from right between his legs to screaming audiences members made for silly fun. “Tacky” actually popped with more grand catchiness thanks to the orchestral accompaniment, and “Amish Paradise” has never sounded more epic. Some of that credit, undoubtedly, goes to fans, who knew every word to what’s arguably “Weird Al”‘s most recognizable lampoonery.

(Read: Ten ’80s Acts to Check Out on Tour This Summer)

Though the concert was unlike any Al’s delivered before, it ended in familiar fashion: an all-Star Wars encore. A line of Stormtroopers flanking Darth Vader came out before the Jedi-robed band, which brought the expectant crowd right to their giddy feet. It’s hard not to feel that sense of joyful weirdness Al has long instilled in diehards when he starts recounting The Phantom Menace in “The Saga Beings”, the only parody song in history to actually improve upon a film’s plot. When Al finally brought out his beloved accordion to lead us all in a rendition of “Yoda”, it was like Clark Kent taking off his glasses.

This wasn’t “Weird Al” trying to elevate himself on a high-brow concept; it was just him doing what he’s always done: being one of the greatest, weirdest performers of all time.

Watch a Surprise Proposal at a Florence and the Machine Set...