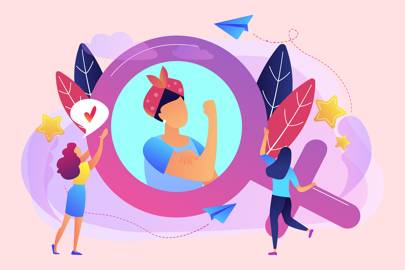 It’s recently been revealed by the Office for National Statistics that last year’s birth rates across England and Wales hit the lowest they’ve been since records began in 1938. Officially there were 657,076 live births in 2018, meaning a decrease of 3.2% by 2017 and a 9.9% decline since (as described on the ONS website) “the most recent peak” in 2012.
Plus, the total fertility rate (live births for women aged 15-44) dropped per woman from 1.76 to 1.70, signalling we’re having less kids each. Which could, of course, be a conscious choice.

Why are we so terrified to talk about our infertility?

Cue widespread panic about population numbers dwindling and the worrying causes, but here at GLAMOUR HQ, we’re asking why these stats need to be seen as a bad thing? In 2019 women undoubtedly have more freedom of choice than ever before, and we thankfully aren’t defined simply as mothers or homemakers like we depressingly once were.

Feminism and gender equality at the forefront of our focus, let’s not forget a man’s role within birth rate changes too. Because family sizes aren’t all down to females.

Aside from heartbreaking fertility struggles which could well play a part in these numbers, there are positives to take away. Interestingly, the ONS found fertility rates decreased across all age groups, “except for women aged 40 years and over, where the rate remained at 16.1 births per 1,000 women of this age”. It’s no secret that women are now having babies later in life, a welcome move marking age being much less of a fertility barrier than ever before.

Happily too, the stillbirth rate is at a record low for the second year in a row. Teenage pregnancy rates have dropped dramatically, in fact more than halving across England and Wales over the past 20 years. And there are also other millennial matters such as climate change to consider.

As stated by Population Matters’ patron Sir David Attenborough on their website: “All our environmental problems become easier to solve with fewer people, and harder – and ultimately impossible – to solve with ever more people”.

I spent £15,000 freezing my eggs at 36 and it completely failed, here’s how I coped with the heartbreak

Last week Prince Harry sparked debate by stating that himself and Meghan Markle would have two kids maximum, which is completely their choice, and frankly, nobody’s business to criticise. While he didn’t explicitly cite it as the reason, Harry then referred to the planet’s sustainability. Interviewed by conservationist Dr Jane Goodall for Vogue’s September issue, which Meghan has famously guest-edited, he said: “I’ve always thought: this place is borrowed. Surely, being as intelligent as we all are, or as evolved as we all are supposed to be, we should be able to leave something better behind for the next generation”. Acutely aware of the climate crisis, Harry continued, “But, in fact, we’ve stolen their future. Not all of it. But we’ve got to try and pay a little of it back. And get together to try and heal some of the harm, and at least slow down climate change.”

And while his comments have been met with anger by some (let’s face it, when aren’t they?), we applaud Harry for his work drawing attention to wider issues. Clearly Harry and Meghan just can’t win, but these views are in keeping with several millennials’ too and they expertly use their platform to inform and educate.

‘Climate anxiety’ is a worrying new mental health issue among millennials, but experts say we have every right to be concerned

Earlier this year, organisation BirthStrike hit the news, with members deciding not to have children for the same reasons. Describing their work as “the clarion call of would-be parents who, in the face of climate emergency…demand system change”, the group raised a link between childbearing and climate issues.

A useful summary of where we’re at as a society, these new ONS stats have posed questions and brought clarity in equal measures. It’ll be interesting to see how the figures compare next year. And ultimately, shining a light on declining birth rate reasons just makes us even more thankful for the access to contraception, and choices available across England and Wales in 2019.

Meghan Markle’s Royal Tour Outfits And Where To Buy Them

A CLOSER LOOK AT THE NIKE LEBRON 15 “CAVS”