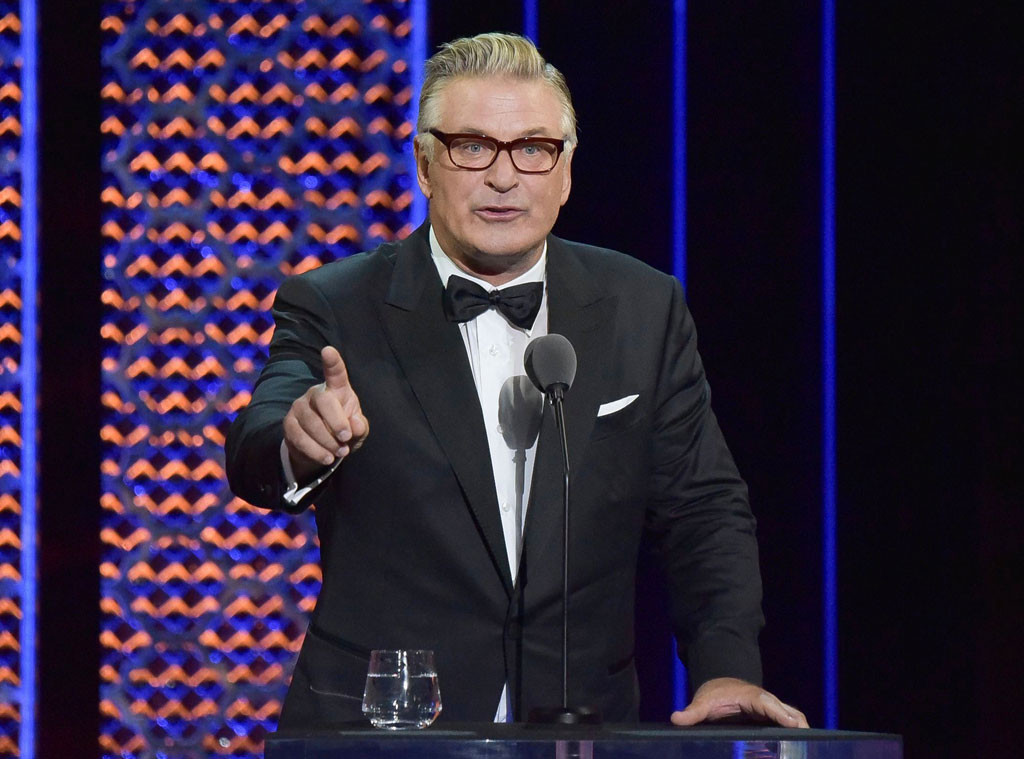 On Sunday night, Alec Baldwin was the center of attention for Comedy Central’s annual roast. And this year’s honoree didn’t disappoint when he got up to the podium and poked fun at his guests, which included his daughter Ireland Baldwin, Blake Griffin, Caitlyn Jenner, Ken Jeong, Nikki Glaser, Robert De Niro and many, many others.

However, it was Glaser and Griffin who stole the show during tonight’s knee-slapping roast. “Robert De Niro, I can’t believe I get to share this stage with you, and by that I mean the final one of your life,” the Trainwreck star and comedian quipped.

Later that night, she added, “Alec, you’ve had four kids with Hilaria [Baldwin], which is incredible, because isn’t your s—n just oatmeal at this point? Oh, Robert just got excited when I said ‘oatmeal!'”

Moreover, the NBA player knocked it out of the park with joke after joke.

His most memorable? “On behalf of the entire NBA and half the rappers on the Billboard charts, thanks for giving your daughters daddy issues,” he said. Ouch! Roast Master Sean Hayes had everyone in the room crying tears of laughter with his roasts of the night.

If you weren’t able to see the comedy special on Sunday night, take a look at the funniest roasts of the night in our gallery below.

The 35-year-old comedian kicked things off and was arguably the best of night. “Robert De Niro,” she began. “I can’t believe I get to share this stage with you, and by that I mean the final one of your life.” Later, she added, “Alec, you’ve had four kids with Hilaria [Baldwin], which is incredible, because isn’t your s—n just oatmeal at this point? Oh, Robert just got excited when I said ‘oatmeal!'”

Considering Hayes was the Roast Master of the night, it only makes sense he would make this list. Staring things off, he said, “No offense, Blake [Griffin], but I’m a better ball handler than you.” Later that night, he poked fun at Baldwin. “It’s true, Alec had a substance abuse problem in the past, but he worked through it and hasn’t done anything of substance in 20 years.”

The surprise hit of the night was the 30-year-old star, who made everyone cry tears of laughter. And yes, shots were fired. “On behalf of the entire NBA and half the rappers on the Billboard charts, thanks for giving your daughters daddy issues.” OKURRR.

Grab the tissues, because the 61-year-old will make you cry tears of laughter. “Sharing the spotlight is my gift to all of you,” he began. But taking things to a new level, he poked fun at the NBA player, saying, “Blake, moving from LA to Detroit is so sad. That only happens when a prostitute’s body is sent back to her family.”

The legendary actor didn’t mind poking fun at himself tonight. “After tonight, Rocky and Bullwinkle won’t be the worst thing I’ve ever done,” he quipped. He also teased Caitlyn Jenner and said, “Comedy Central wouldn’t put Caitlyn Jenner on a roast until after her transition so they could pay her 20 percent less.”

The 23-year-old model didn’t hold back and brought up her father’s infamous voicemail. “Dad, I’m Ireland,” she quipped. “It’s good to be here. I almost didn’t even know about it because I haven’t check my voicemails from my dad from the last, like, 12 years.”

Jeong pushed the boundaries tonight and went for it. His best of the night? “Caroline Rhea, you look like adel… a dell computer.” He later teased, “We’re really here to celebrate the real star of 30 Rock and SNL. But let’s be honest, Tina Fey said no. Alec, no offense but you weren’t the star of 30 Rock and with De Niro here, you’re not even the star of your own f–king roast.”

Nothing was off limits and Carolla bit was proof. “Ken Jeong showed his d–k in The Hangover, and Ken, I haven’t seen a d–k that small since I took my nephew ice-fishing!”

Lady Gaga and New Boyfriend Dan Horton Rock Out Together At...

Porsha Williams Goes Bikini-Clad With A Message For Trolls