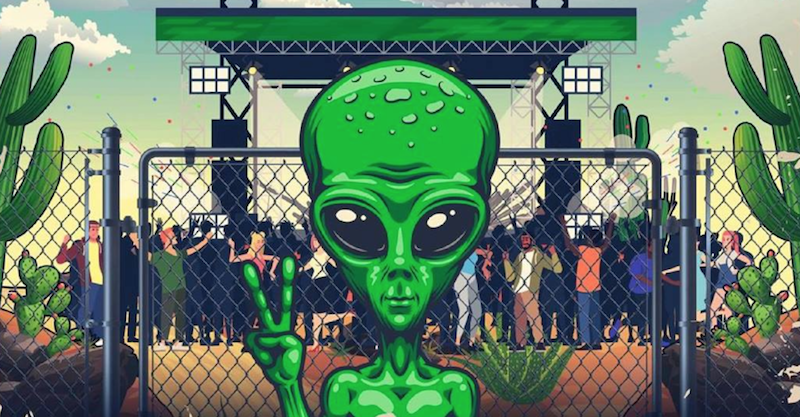 The man behind the viral Storm Area 51 raid that spawned the AlienStock Festival has unexpectedly canceled the event. The festival was scheduled to take place September 20-22nd in Rachel, Nevada.

As recently as Sunday, 21-year old festival founder Matty Roberts had expressed excitement for AlienStock, according to Fox News. By Monday evening however, it was clear the ill-conceived festival wasn’t going to happen. Roberts citied communication shortfalls with the the festival’s permit holder, Connie West, in his statement announcing the cancelation. He said the decision to pull the plug was made to avoid turning AlienStock festival into a Fyre Fest 2.0.,” referring to the legendary disaster co-helmed by Billy McFarland and rapper Ja Rule.

“We foresee a possible humanitarian disaster in the works, and we can’t participate in any capacity at this point,” Roberts stated. He noted there was “a lack of infrastructure, poor planning, risk management and blatant disregard for the safety of the expected 10,000+ AlienStock attendees.”

While the festival may be canceled, AlienStock isn’t exactly dead yet. Roberts has relocated the festivities to the Downtown Las Vegas Event Center, where he’ll hold a free event open to ages 21 and over. The musical lineup, curated by Collective Zoo, remains a mystery.

Those who were hoping to party a bit closer to the actual Area 51 site might also still be in luck. According to West, permit holder and owner of Rachel’s Little A’Le’Inn (an ale house and inn — get it?), her version of AlienStock (sans the name) is still on with 20 bands and two comedians confirmed.

“I’m sad and I’m brokenhearted, but at the same time, it is what it is,” she told Las Vegas station KVVU about Roberts’ decision to back out. “If he chooses to go somewhere else, that’s his choice. I’m still having a party because people are still coming to Rachel.”

“Due to the lack of infrastructure, poor planning, risk management and blatant disregard for the safety of the expected 10,000+ AlienStock attendees, we decided to pull the plug on the festival. The permit holder (Connie West) was given multiple opportunities to provide us with the proof that things expected at this festival were in place. In fact, she refused to provide to us, as agreed upon, contracts, proof of deposits or any paper proof of anything.

We are officially disconnecting from Connie West, Rachel NV and AlienStocks affiliation with them. We will no longer offer our logo, social media, website or Matty Roberts likeness or scheduled appearance. In short, the relationship has ended permanently, and AlienStock will be moving to a safe, clean secure area in Downtown Las Vegas as an alternative.

We are not interested in, nor will we tolerate any involvement in a FYREFEST 2.0. We foresee a possible humanitarian disaster in the works, and we can’t participate in any capacity at this point.

AlienStock is a brand that stands for unity and concern for like minded people. It’s grown into much more than a location. It’s a phenomenon that can only promise absolute safety and peace, and we need to move the Festival to guarantee that. Stay tuned for more news… it’s BIG!

– Matty Roberts Founder of Storm Area 51 and the AlienStock Festival”

For those who still plan to visit Area 51 next weekend, be warned: the U.S. Air Force “stands ready to protect” the secret government facility.

Colin Kaepernick Did Not Sign Off on Travis Scott’s Super Bowl...